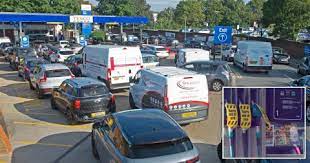 The trucks have no drivers. The supermarket shelves are emptying. The poor are having their subsidies cut. The British government ties itself in knots trying to square what is a circle in Northern Ireland. Brexit- the leaving of the EU- is failing the nation.

But Europe itself is not failing. In fact, it is about to get stronger.

Writing in 1751 Voltaire described Europe as "a kind of great republic, divided into several states, some monarchical, the others mixed but all corresponding with one another. They all have the same religious foundation, even if divided into several confessions. They all have the same principles of public law and politics unknown in other parts of the world."

Sixty-eight years ago, in a way that Charlemagne, Voltaire, William Penn and Gladstone, the early advocates of European unity, could only dream, a united Europe became a reality. Later in 2002 came the launch of the single currency that was the most dramatic of the steps taken towards what surely one day will be a single political entity.

War, time and time again, has interrupted the pursuit of that objective. Continued civil war across the continent, across the centuries, has pitted French against Germans, British against Italians and Germans, Czechs against Poles, Russians against the French and the Germans, Spaniards against Spaniards, Gentiles against Jews, reaching its dreadful climax in World War 2.

As Jan Morris has written in her "Fifty Years of Europe", "great cities lay in ruin, bridges were broken, roads and railways were in chaos. Conquerors from East and West flew their ensigns above the seats of old authority, and proud populations would do almost anything for a pack of cigarettes or some nylon stockings. Europe was in shock, powerless, discredited and degraded". Over the ages no other continent has been the scene of so much war.

Many, if not most, of that generation, wondered in 1945 if they'd ever see Europe again in any state of grace or glory much less unified.

The fact that the urge to bury the hatchet and forge common institutions has come so far in such a short time against such a background is the twentieth century's greatest political achievement. (Following the Declaration of Independence, it took the US nearly 90 years to establish a fully mature common currency; Europe has traveled the same course in 49 years.)

Yet this astonishing triumphal moment- only slightly tarnished by Britain, first, sitting out the common currency and last year implementing Brexit begs the question, what is the glue that holds it all together?

After all what is Europe? Geographically, it is no more than a peninsula protruding from the landmass of Asia. Culturally, it has always been a potage of languages, peoples, and traditions. Politically, it is a moveable feast- of the 35 sovereign states in post-Iron Curtain Europe nine have been created or resurrected since World War II.

Indeed, it is religion, not politics nor economic and monetary union that through the ages has made Europe one, held it together through its vicissitudes (many, tragically, of religious origin), and provided the common morality and common identity that made the EU and make a single currency possible today and political union a tangible, if still hotly debated, goal tomorrow.

Broadcasting to a defeated Germany in 1945, the poet T.S. Elliot reminded his audience that despite the war and "the closing of Europe's mental frontiers because of an excess of nationalism it is in Christianity that our arts have developed, it is in Christianity that the laws of Europe- until recently- have been rooted. An individual European may not believe the Christian faith is true; and yet what he says, and makes, and does, will depend on the Christian heritage for its meaning."

Of course, today one can ask what do the contemporary cults of finance, sports, TV, mobile phones, the internet, Facebook, pop culture and eroticism have to do with a Christian heritage? Nevertheless, despite all, the fact is through changing fashions, through wars big and small, the idea of Europe that persists is essentially Christian. On its own, economic self-interest never would have created the European Union and, later, monetary union. Economic and monetary union has been driven all along by men and women who were essentially idealistic and visionary.

From Jean Monnet, the founder of modern Europe, to Helmut Schmidt, Valery Giscard D'Estaing, Francois Mitterrand and Helmut Kohl, the founders and creators of the Euro, the urge to remove the causes of belligerency and to form institutions that would further the development of a common democracy has been a central purpose. Nor should we forget the words of Winston Churchill who said in Amsterdam in 1948: “We hope to see a Europe where men of every country will think as much of being European as of belonging to their native land”

Europe is not first and foremost a political concept or a financial convenience. It is an ideal.  That’s why, to take one example, absorbing Russia should be on the agenda.

We will work at it all our lives, as will future generations. The Brexit crisis, I foresee, will come to be seen as the defining moment for creating the right conditions for the pursuit of political union. Brexit is already visibly failing. In Britain, many forecast a winter of discontent. Britain is going to be left high and dry, perhaps, after the next election, knocking on the door to be let back in. If not, Scotland on its own will leave the UK and enter Europe as a sovereign state. Once the EU has recovered from the loss of Britain which soon it will, political union will take its place at the top of the European agenda.

Slight problem. Mine was 1st, AJD was 2nd and as always Observer was turd LOL

After the thoughtful comment by ajd comes the anticipates ripost from Oh Ya who like a drunk in a bar says "oh ya?" in response to anything beyond his limited comprehension.

Upon examining Europe's transformation, with its successes and failures, one must also look at the transformation currently underway in America. Europe endured wars and turmoil unmatched in other parts of the world, but globalist visionaries envisioned a united Europe based on a common democratic christian ethic. During that time America experienced its own war, the Revolution, which presaged and birthed its own union, the United States of America. The major differrence though was that America's union was predicated upon two much more ephemeral and limiting elements...money and race. To this day, those two elements are both the blessing and bain of a country now wracked with division and hatred. Money was made the be all and end all of American existence and its grossly uneven distribution, which grows more uneven each day, pits the haves against the have nots. The have nots in turn have turned their resultant anger towards those who do not look like themselves....RACE. The "debates" now underway in the US very much centre entirely around those two issues, both of which the country's leaders are too small-minded to acknowledge that the problems even exist, let alone have the will to address them. Look at the countrywide revolts underway, led by ignorant people who, for the most part, do not understand the issues over which they are most upset. CRT is at the forefront, in reality a non-issue that consumes people who couldn't on a good day provide a cogent explanation of its principles. RACE is the real problem and racism is its manifestation. Left unaddressed in any realistic and honest way, just as it was one of the prime reasons for the Revolution and the Union, it will be the prime reason for its dissolution. The economic shortcomings of America likewise leave much to be desired. Currently the Democrats and their new President are trying to enact another"New Deal" that would sustantially address the redistribution of money in the country. The Republicans will fight vigourously to thwart the process, but even if not successful in that fight, they are engineering the mechanisms to ensure that their control of the country will never be threatened...the electoral system. They will never give up their monetary dominance. MONEY. So while Europe's union struggles on with its own very unique set of challenges, America's union remains very much at risk as its populace struggles with its own very unique set of challenges, both of which they are overwhelmingly failing to address in any meaningful way. All dynasties have their day!

If Johnny thinks because there is a trucker shortage a nation fails then the USA is a failed nation also as the shelves are bare in some stores. This guy is a idiot and NRP loves him