WORLDVIEW: Biden gave the push to US second failed war. 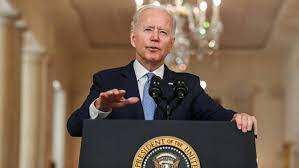 I like this. It’s from yesterday’s New York Times. “Senator Christopher Murphy, a Democrat of Connecticut who supports President Joe Biden’s withdrawal, said those arguing to keep troops in Afghanistan were the ones who failed to win the war for two decades and perpetually pushed to stay even though “we have been losing for six to eight years.”

“To me, it’s the same game,” he said in an interview. “Everybody’s got a plan. But I’ve been working on this long enough to know everybody’s plans are” awful, he added, using an expletive. “The reality is inescapable.”

In seven pithy lines, Murphy sums it all up. Yet too many Americans and their European allies have tried to call Biden out. While one expects Republicans to attack Biden for “cut and running”, there has been a chorus of centrist critics who are having a go at Biden, arguing that he has dropped the ball in his haste to get out of Afghanistan. The media have savaged him. Yet the media, by and large, don’t remind their audience of the history of the US intervention- that in the 1980s the US built up the Taliban both politically and militarily in an attempt to drive out the Soviet invaders and undermine the stability of the Soviet Union.

Women’s groups are having a go at Biden, arguing, in effect, that all the progress in the advancement of women in recent years will be thrown overboard by the Taliban once the benign US and NATO troops go home. Does this mean the softer, gentler, more caring, sex is now wedded to war-making? From now on do we conduct the necessary fight against male chauvinism by force of arms?

In truth, Biden has done more than anyone can reasonably expect. To say Biden had not thought the exodus through is to belittle his long-held convictions about the stupidity of the Afghani military mission. In President Barack Obama’s national security circle Biden was the only member who consistently argued for total withdrawal. In the 12 years since he first took this stand imagine how many US, NATO, and Afghani soldiers’ lives, not to mention hundreds of thousand civilians, lives might have been saved if the withdrawal had happened in 2009. Obama, who should have known better, got rolled by his generals into a sharp increase in the number of militaries deployed to fight the war.

While are dealing with massive intellectual dishonesty. These critics are making a souffle with no eggs.

Let’s look at some of the criticisms:

My initial response to Biden's right wing critics is "be thankful the withdrawal didn't happen under trump's admin"!! We have already seen what he did to the Kurds. He and his insane hatchet man Mengele Miller would have surely left ALL of the Afghan helpers behind to a terrible fate. First result. Then there is no doubt that, like all other things he did, trump's withdrawal would have been characterized by even more gross incompetence, like most of the other actions by his admin. I have little faith though that the push to war by the US will stop. The war machine and weapons lobby is extremely strong in that country and they will never give up the fight willingly. The congress has been bought and will continue to plough the economy with military spending. Notice that the pentagon's budget was just increased...again. The accompanying reality though is that america is very much in the midst of its slide to demise. Look at the political system. Repubs are pushing unerringly towards a one party govt, rural america is steadily transforming into the new "south", stricken with perceived grievances, talk of rebellion in multiple areas and hateful of any change that involves people that do not look like them. Texas is a prime example. The last 10 years have seen the population grow by about 4 million people, most of whom are non-white. Look at the repub response! Voting restrictions and unending punitive and fascistic laws being enacted, the example being set for other repub-run stares. History shows that this is how empires end. The Afghan debacle is not even close to Biden"s fault alone. It is just another indicator of the demise of the america we all used to know. The big question though is how the rest of us deal with it. Are we prepared??

Republicans are beating up on Biden. Why were Republicans all for getting out of Afghanistan wgen Trump called for it and negotiated an agreement to do it this year?

Even Ann Coulter got it right when she said that Biden was the first president with the balls to get it done.