WORLDVIEW: A return to great depression? 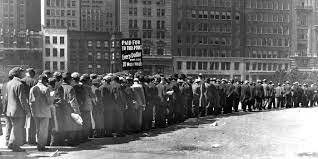 The gathering economic crisis, which the financial papers are somberly predicting, has too many of the makings of turning into a World Depression and must be a time for mental stock-taking.  If we wind back the clock just a few years to the beginning of the  century when big banks on Wall Street precipitated the “Great Recession” we could say, looking back, that today’s imminent crash comes after one of the most successful boom periods in history. For a while, it seemed to sweep all before it. It coined a new word "globalization- open your doors wide and you'd gain more on the swings than you'd lose on the roundabouts.

President Bill Clinton and his Treasury Secretary Robert Rubin were passionate proponents of this brand of economics which began its shelf-live in their day. Despite all the evidence and turbulence, they and many economists and politicians still appear unshaken about the usefulness and deficiencies of globalization. In the long run, the theory of globalization and 100% wide open doors and windows in the financial and economic markets may make a lot of sense (and some of it in the way Adam Smith described free trade still does) but, as John Maynard Keynes said, "in the long run we are all dead".

Why is there belatedly only now a discussion of how globalization has failed the Western working class, putting tens, if not hundreds, of millions out of work, as their comparative advantage competed away?

In the US there became, as jobs disappeared, a plague of the misuse of opiates including the dangerous drug fentanyl that has savaged whole communities. No wonder they voted and will vote for ex-president Donald Trump. (He didn’t do much in giving economic aid to these people, but he did slow down the impetus of cheaper Chinese imports, and the garner of protest votes.)

Levelling up
In the UK, the present prime minister, Boris Johnson, has talked much about what he called “leveling up”- channeling government investment to the poor north to pull it up to the standards of the rich south. But after three years of Johnson’s government not much has been achieved.

Why is it that the Western financial powers, to give but one example, will give no thought to the introduction of the Tobin tax (named after the Nobel prize-winning Yale University economist, James Tobin) that would, by taxing international currency transactions, act as a brake on speculators who dive in and dive out of a currency without any inhibitions whatsoever?

The tax would provide a very useful pool of international funds that could replenish the capital of a re-thought International Monetary Fund. The money could be used to aid development in the poor Third World who are suffering badly from the knock-on effect of the West’s grave economic problems. It could also be used for job re-training in industrialized countries.

The most damning evidence to be marshaled against the supposed benefits of unfettered globalization is to be found in successive Human Development Reports, published by the United Nations Development Program. This measures economic progress in all its dimensions, not just income per head but life expectancy, adult literacy, and educational achievement.

In the round, the figures look good, even spectacular. The poorer countries of the Third World have covered as much distance in human development during the past 40 years as the industrialized world did in over a century. A simple but telling fact: a child born today in a developing country can expect to live 18 years longer than a child born 35 years ago.

But this is more because of the hard humdrum work of better rural health services and the rapid growth of primary schools- and the often-derided work of the aid agencies- than because there has been a massive surge in economic growth brought about by globalization, although good growth has helped.

Mounting debt
Because of the coming Western-led depression, involving present-day rising interest rates plus mounting debt plus the impact of Covid, climate change and the unnecessary war in Ukraine, many countries in the Third World are experiencing serious economic decline, with much more decline to come. To lock-in what has been accomplished on the eve of perhaps the world's greatest ever depression, bar the one of the 1930s, is going to require a bit less concern about the alleged long-run benefits of globalization and more, much more, awareness about the immediate possibilities of on-going human development. Advancing it even in hard times need not be an exorbitantly costly undertaking- it means focusing on the essentials of basic education, health, nutrition, reproductive health, family planning, safe water, and sanitation. The UN’s Development Program reckons it would cost a mere 0.1% of world income. "Barely more than a rounding error", it observes. And the results would be incredibly telling. There is no need, as they suffer already from the slow-down in economic activity up north- countries like Indonesia, India, Nigeria, Tanzania, and Peru- to say a whole generation now faces no future but a fall back into the poverty they so recently escaped.

Already countries as disparate as Costa Rica, Tanzania, Barbados, The United Arab Emirates, Oman, Malaysia, and Taiwan have shown, at varying levels of development, what can be done given the political will. With well-directed resources, they have sharply improved the well-being of their ordinary citizens, at no overwhelming cost. With more aid from Europe, Japan, and North America many more could emulate them

A little less grand theory on the supposed widespread benefits of globalization, now shown to be something of an illusion as far as many poorer people are concerned both in the developed and developing countries, and a little more reflective listening to the grassroots could produce a better world- even if there is a mammoth world depression.