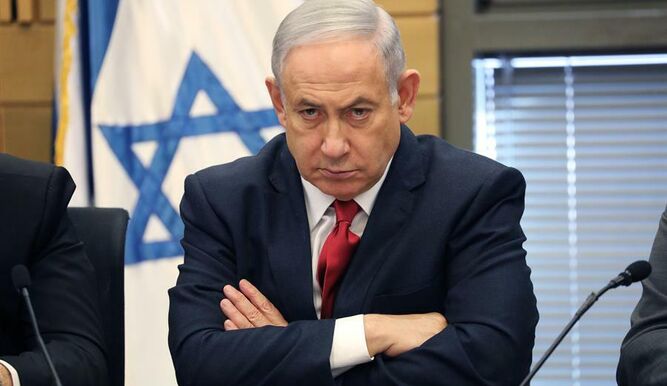 The Israeli Supreme Court is deliberating whether US  President Trump ally  Benjamin Netanyahu, accused of corruption, can be prime minister in the new Executive that should be formed this Thursday, and will address the validity of the government agreement with centrist Beny Gantz.

The High Court today began the hearings divided into two days - one for each matter - and which are being broadcast live. The decision it makes, predictably this Wednesday, could give another political turn to the country.

A bigger-than-usual panel of eleven judges has begun to listen to arguments for and against disqualifying Netanyahu as prime minister of the new government for being accused of fraud, bribery and breach of trust in three separate corruption cases , crimes for which a criminal trial is scheduled for May 24.

Citizen and political organizations have presented 20 requests against this situation and against the coalition agreement with Gantz, whose materialization forces the modification of some basic laws of the State.

The lawsuits ask the Supreme Court to clarify whether a defendant of corruption can form a government. Israeli law prevents being a minister in these circumstances, although it does not explicitly refer to the chief executive.

The plaintiff Movement for a Quality Government relies "on the law and on ethics" to ask for its disqualification and not on the number of voters or deputies who support the Executive.

The Office of the Prosecutor, however, stated that it does not see "legal impediment "and that" the main consideration that must be taken into account is the will of the voters. " Representatives of Netanyahu argued that the Judiciary should not "intervene in the democratic process" of the people and parliamentarians.

The judges will hear  on Monday  the demands against the coalition agreement between Netanyahu and Gantz that needs legislative changes in order to be carried out.

The Israeli Parliament (Knesset) plans to vote on the amendments to the law this Thursday, when the term to form the Executive ends, and thus avoid calling a fourth electoral appointment in just over a year.

2 things . 1st newsroom p just cant stop 8tself from taking a shot at trump because it is a left wing rag and 2nd lock nuttynatzoo up for life and the middle east will be a better place

30 days ago
The comments are the responsibility of each author who freely expresses his opinion and not that of Newsroom Panama.