US and Canada clash on Cuba and abortion 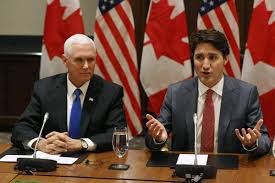 Canada and the United States clashed on Thursday, May 30 over Cuba and abortion a few hours before,  President Trump’s tariff moves against Mexico were announced throwing a cloud over discussions in the Canadian administration on the NAFTA replacement agreement.

The countries disagreed Thursday on the role that Cuba must play in the Venezuelan crisis, an influence that US  vice- president, Mike Pence described as "malignant".

After a meeting  in Ottawa with Canadian Prime Minister, Justin Trudeau, the US Vice President at the final press conference said : "I want to thank Canada for its strong position in support of a free and democratic Venezuela," Pence, noted that Canada recognized opposition leader Juan Guaidó as the Venezuelan "legitimate president" shortly after the United States had done so.

"We also need to work together to expose the malign influence of Cuba in Venezuela and ask Cuba to stop this influence and allow freedom to flourish in Venezuela, and we must do it together," Pence added.

But during the same press conference, when Trudeau was asked about Canada's position on Venezuela and Cuba, the Canadian prime minister refused to follow Washington's position.

"In the Lima Group we recognize that Cuba can potentially play a positive role in the welfare and future stability of Venezuela," Trudeau said.

"That is why Canada has been talking to Cuba in a way that tries to allow a positive relationship in a possible transition in Venezuela," Trudeau added.

The prime minister and Pence also spoke about the differences between the two countries with respect to abortion, after the enforcement in the United States of laws that restrict the right to abortion in several states.

Trudeau said he has conveyed to Pence "the concern" of Canadians for those laws and added that his government "will always defend the right of women to choose."

Pence said he was "proud to be part of an anti-abortion administration" and although he added that Canadians have to decide how to deal with the issue. He said he cared more that  in the United States Democrats support "even infanticide."