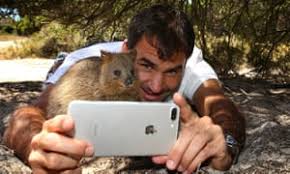 After becoming a global sensation in the last decade, selfies, or self-portraits, have killed five times more people than shark attacks including at least two in Panama. And the trend is increasing, with the emergence of accessories and the constant sophistication of smartphones.

Between October 2011 and November 2017, at least 259 people died taking selfies in different parts of the world, quintupling the 50 killed by shark attack, according to the Indian publication Journal of Family Medicine and Primary Care.

Although women are the ones who take the most selfies, there are young men, predisposed to risky behavior, those who occupy three quarters of deadly statistics, dying in crashes, drownings, falls or accidents with firearms.

India, with its 800 million cell phones, has the world record for selfie deaths in this period, with 159, more than half of the total. Followed by Russia, the United States, and Pakistan.

Young people in India have been killed by a train or drowned after their boat sank at the time of taking the picture. This situation has led the country to establish "selfie -free zones", 16 of them in Bombay.

Russia added 16 deaths in the same period. Looking for the perfect selfie, Russian citizens have died falling from bridges or tall buildings, shooting themselves or manipulating an antipersonnel mine.

In the United States, with 14 deaths in the years reviewed by the publication, most of the deadly selfies due to accidents involving firearms have been recorded.

The Grand Canyon National Park  has also been the scene of tragedies with tourists who fell into the void when trying to self-portray themselves.

In Panama two people have died while taking selfies on balconies.

Balconies should be outlawed. For safety.

Apparently the Grand Canyon Nation Park has been moved from Arizona to Colorado.