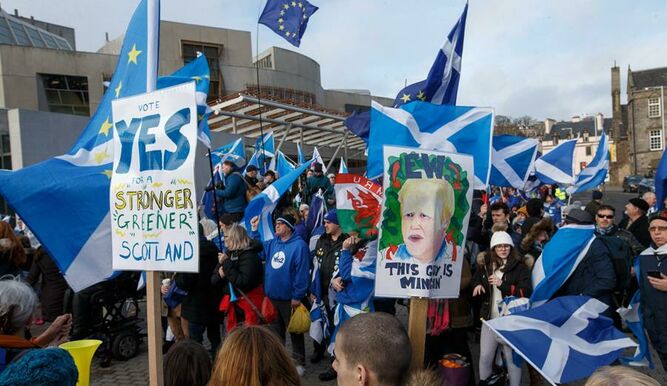 EDINBURGH Feb1. EFE News Agency "Scotland still loves EU" reads one of the banners of the pro-European demonstration held today in Edinburgh. With this love motto, Scotland wants to make it clear that it did not vote in favor of leaving the European Union (EU) and that, for some, justifies a new independence referendum.

The British region, where 62% voted to remain in the EU, dawns today outside the community club, which has gathered hundreds of citizens in Edinburgh, who have claimed slogans in favor of a new referendum, something which the British government strongly opposes.

The Prime Mnister, the conservative Boris Johnson, argues that the issue was settled in 2014, when 55% rejected independence, although the nationalist Executive Nicola Sturgeon believes that Brexit provides a completely different scenario than justifies a new appointment with the polls.

From some streets before reaching the regional Parliament, the sound of bagpipes is heard. Among the small pools surrounding the building, protesters have organized a corridor through which a couple of musicians parade, while others listen to the speeches of the organizers, the pro-independence group "Stand Up For Scotland".

In front of them, a small group of about ten people celebrates Brexit and the achieved "British independence".

"I am sad, but I have hope because I know we will return to the heart of Europe. We are a Europeanist nation and we do not want to be isolated," says John Love, 66, while holding a huge flag made from different standards of Scotland, the EU, and the regional independence movement.

A few meters beyond, between a sea of community flags, Scottish and others with the emblem "Yes" in support of separation, a group of friends from Fife and Glasgow comments on the "disappointment" they feel for not being able to stop the exit of the EU, although they are hopeful of being able to enter it again if they manage to make the movement they support become a majority among the Scots.

Marie, Wendy, Moira and June met last year in one of the marches for independence and since then come together to each call. "Scotland is European, we voted for permanence and we should not have left," says Moria, who is confident that the Scottish Government will be able to convene a referendum this year so that the regional Parliament "has all the powers" and re-entry into the club

The Putin plan to wreck the EU and the US is well on the way. They have Brexit that was pushed by the same Russian Intel and bot group that was proven to put Trump in power. The Scots are not blind to the facts. The sooner Scotland breaks with Boris´s proto fascist regime the better. Good on the Scots!

I think that you need to review a couple of salient facts. 1. The Conservative party (the government) has 6 seats in Scotland out of 59 so they hardly have any mandate in Scotland. 2. The Scots voted by an overwhelming vote to remain in the EU. And 3. Polls taken recently suggest 60% of the population want independence from the UK

Sounds like some Scots are having the same trouble as Dems .the results of a vote . Both need to accept they lost