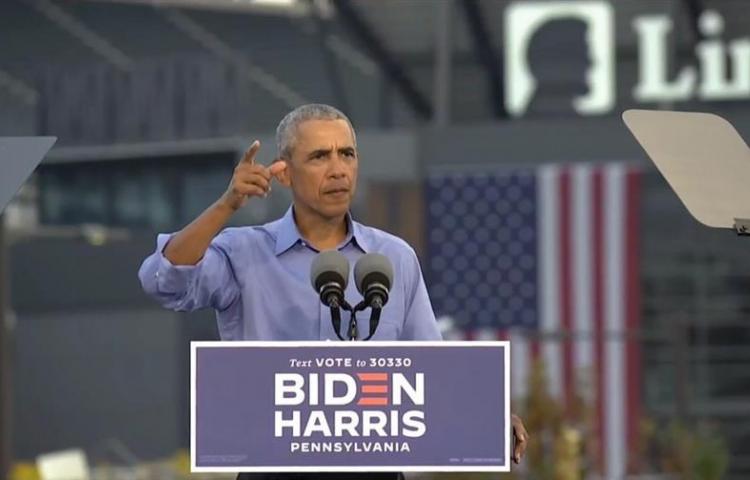 Former US President Barack Obama (2009-2017) entered the campaign on Wednesday to support his former vice president and now Democratic candidate for the White House, Joe Biden, with less than two weeks to go before the elections.

Obama debuted in the city of Philadelphia, a Democratic stronghold within the disputed Pennsylvania, one of the key states that the former president won in 2008 and 2012 but that the current president, Donald Trump, conquered in 2016.

Despite the fact that Biden was his vice president For eight years, Obama has kept a low profile during this campaign: in the primaries he only supported him when his victory was incontestable and his debut on Wednesday occurs when more than 40 million Americans have already cast their vote.

This low profile contrasts with the one he maintained four years ago, when he gave himself up to the campaign of the then Democratic candidate, Hillary Clinton reports Efe Newsagency.

"This is not a 'reality show.' This is reality. And the rest of us have had to live with the consequences of him (Trump) proving incapable of taking work seriously," Obama said in a rally.

Obama mocked Trump for having complained the night before about having to campaign in Pennsylvania when he had already taken it for granted and also for having been infected with covid-19, at the same time that he denounced that he had hidden his business in China.

"We know that he continues to do business with China because he has a secret bank account in China. How is it possible?" Said Obama, who said that "it is not a good idea to have a president who owes a lot of money to people in a foreign  country.“

"He must be paying more money to foreign governments than he pays in taxes in the United States," he said, adding that he paid more taxes in his first job as an ice cream vendor when he was 15 years old than the $ 750 Trump paid when he was already President.

Personal
Obama thus entered the personal arena with Trump, something he has avoided doing since he left power almost four years ago despite the relentless attack by his successor says Efe.

"Eight months into this pandemic and cases are on the rise again across the country. Donald Trump is not going to protect everyone all of a sudden. He is not even able to take the basic steps to protect himself," Obama said.

In addition, he called Trump a "poor guy" for complaining about traveling to Pennsylvania the night before: "The president was in Erie last night and apparently he complained about having to travel here. And then he cut the event short. Poor guy."

"With Joe and Kamala [Harris]at the helm, they won't have to think about the crazy things they say every day. They can get on with their lives knowing that the president is not retweeting conspiracy theories," Obama said.

jimmy d. The only word for you all who believe the words that come out of El Duce's mouth....gullible.

Whoever this casual observer is I only have one word, Moron.

Not a leftist full of hate. Just a trump observer over the last 30 years. Apparently you haven't. Or are you just like this blatant 3rd rate con man? You must be just as full of hate as your hero.

The only mental illness resides in the White House. Pathological liar, 3rd rate con man and about to be private citizen (jail bird). Hope he likes his jump suit. It'll match his face.

The word is out? LOL you mean on fake news. They have been brainwashing their leftist minions to hate our President. It's a cult of mental illness.

Play it down all you want, the word is out that Trump is trash. No one shows up for a Biden Harris rally because they aren't stupid enough to hold a regular rally during the pandemic. They are not like Trump, so desperate, he doesn't care who gets sick or infected as long as he can hold his cult meeting. Biden/Harris do smart and relevant things like virtual and drive-up rallies. Barack Obama held his tongue for almost 4 years while Trump took all the pot shots and insults, but now he is very intelligently letting the entire world know what no one in Trumps following had the balls to do, how much of a misfit he is, how he is driving this country in the ground, how he is trying to bully to cover up his ignorance, and how he is attempting to turn this country into one big race and cultural war. Good riddance to Trump!!

Record early voter turn out! You think for a second they're all voting for El Duce???? HA.

Hussein and his husband Michael are irrelevant at this stage of the game. No one shows up at Biden/Harris events let alone Obama's. Low energy and enthusiasm among the Dems this election.