New heatwave  scorches US and Canada 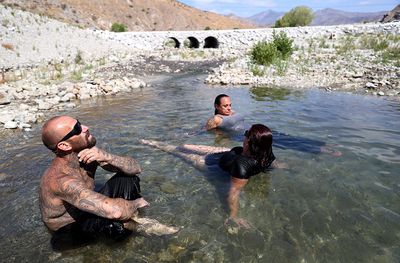 AFP - Millions of people in the western United States and Canada were hit by a new wave of scorching temperatures Sunday, with some roads closed, limited rail traffic, and evacuation orders.

In Canada, where forest fires continue to spread with 50 more outbreaks declared in the last two days, the government announced new emergency measures to prevent the fire.

The thermometer rose over the weekend over much of the Pacific coast and inland to the western edge of the Rocky Mountains.

"A dangerous heatwave will affect much of the western United States, with likely record temperatures," the National Weather Service said on Sunday

According to the National Weather Service (NWS), Las Vegas equaled its all-time high at 47.2 degrees Celsius, a mark the city in the middle of the Nevada desert recorded for the first time in 1942 and three times since 2005.

Forecasters have issued a warning bulletin for the metropolitan area, as well as for several other urban centers, including Phoenix and San Jose, in central Silicon Valley.

This new heatwave comes less than three weeks after another hit in late June, with record high temperatures for three days in a row in the Canadian province of British Columbia.

The conditions of this wave caused the historical record of high temperature to be broken for three days in a row in this province.

Trains are one of the common causes of forest fires. The Canadian government has sent investigators to the city of Lytton, 250 kilometers northeast of Vancouver, to see if the passage of a freight train could have causes the fire in late June that destroyed 90% of the city.

Several roads and highways in the British Columbia area have been closed as the government called the wildfire risk "extreme." A dozen towns or villages remain under evacuation orders.

As of Sunday morning, the number of wildfires across British Columbia continued to rise, reaching 298, according to authorities.

Last month was the hottest June on record in North America, according to data released by the European Union's climate monitoring service.

So far, human activity has caused a global temperature rise of about 1.1 degrees Celsius, which has resulted in more destructive storms, more intense heat waves, droughts, and increased wildfires.

According to the World Meteorological Organization (WMO) and the British Weather Service, there is a 40% chance that the annual global mean temperature will temporarily exceed 1.5 degrees above pre-industrial temperatures in the next five years.