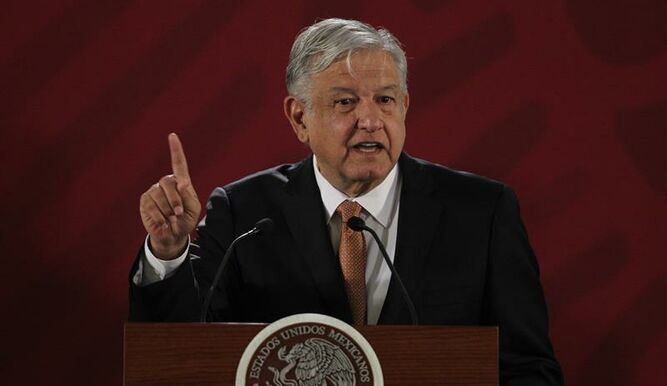 Mexico, president Andrés Manuel López Obrador, said Sunday, September 1  that there is a "mutual respect" with the United States without neglecting the defense of Mexican migrants in the neighboring country against possible violations of human rights.

"We have made sure that the bilateral relationship with the United States is conducted based on mutual respect, development cooperation and negotiated solutions," said the president from the National Palace, accompanied by some 500 guests, including ministers, political and business figures like magnate Carlos Slim.

Leftist leader López Obrador was presenting  - his first government report which is traditionally celebrated in September.

Shortly after starting his speech focused his message on foreign affairs and his relationship with neighboring countries.

He explained that the federal Executive offers "cooperation and friendship" with all the nations of the world, and especially with those of Latin America and the Caribbean, for the links of "neighborhood,

On the United States, he highlighted this "mutual respect" but also recalled that millions of Mexicans in that country may suffer "adverse situations."

"The current Mexican government defends Mexicans with respect to the sovereignty of the neighboring country and with all the legal instruments at their disposal," said the leader.

He stressed that Mexico has a wide network of consulates that, based on United States law and international conventions, seeks to "prevent or remedy violations of the human rights of Mexicans in the neighboring nation."

He expressed his condolences, once again, for the "abominable" massacre in El Paso, Texas, where 22 people died, eight of them Mexican, on August 3.

After the migration crisis affecting the region, especially since October 2018 with the caravan phenomenon, the president of Mexico once again opted for economic development and showed his interest in joining the United States and the countries of the North Triangle of Central America (Guatemala, Honduras and El Salvador) in its action plan.

MEDIAWATCH: Queen Elizabeth topped the ex-royal st...
3
Over 3,000 including children displaced in narco ...
3
Meghan’s father could testify against her say UK...
1
WORLDVIEW: Thousand die but Ukraine paradox live...
0
After fires  surviving Koalas could be endangered...
0