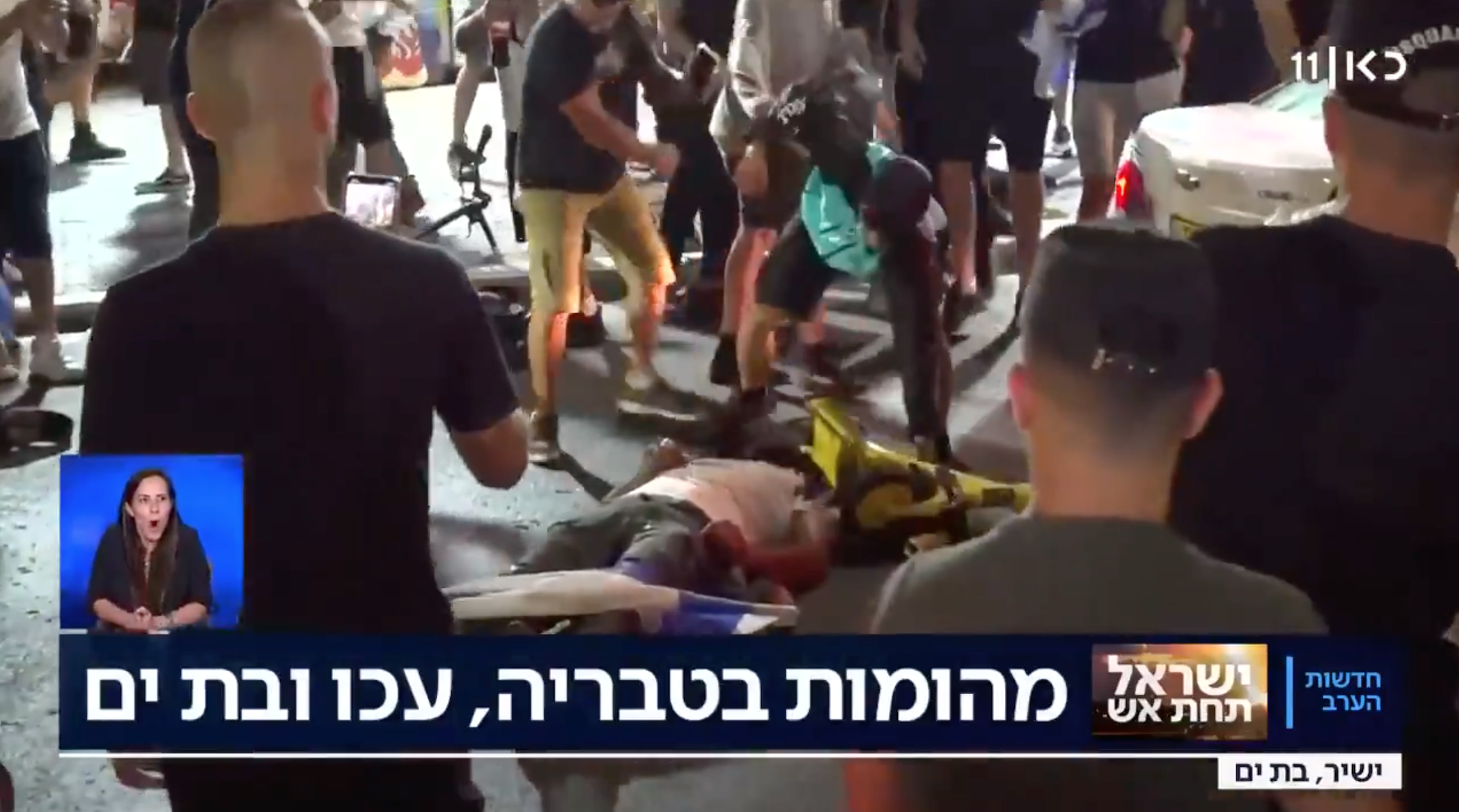 While exchanges of Palestinian Hamas’ rockets and Israeli airstrikes on Gaza have happened before, this week’s deadly warfare has been joined by a new specter: Inter-Israeli violence. In towns where they normally coexist, Jewish and Arab Israelis attacked each other yesterday, leading Prime Minister Benjamin Netanyahu to grant police emergency powers. “Nothing justifies the lynching of Jews by Arabs and … Arabs by Jews.” The Palestinian death toll from Israeli airstrikes has now reached at least 69, including 16 children, since fighting started Monday, while six Israelis, including a 5-year-old boy, have been killed by more than 1,000 rockets launched from Gaza.

Footage of a far-right Israeli mob attacking a man near Tel Aviv they believed to be an Arab was aired live on Israeli television Wednesday night, as the Israel-Palestinian conflict raged on.  Sources NYT, Aljazeera, France ,24, Haaretz

ADJ only black lives matter, if you say differently you will be beaten, fired from your job and cancelled from twitter and facebook. ADJ since you have already been outed as a racist in a previous thread you have no legitimacy.

I'm suprised that Gerald didn't say " the only good Palestinian is a dead one." White Americans used to say something similar about the indigenous people who were pushed out and killed.

Israelredalert.org please go to this site and donate to help the Jewish victims of the Palestine rocket attacks. Many decent people are in bomb shelters and need assistance. As Christians we should support our Jewish allies. https://help.ifcj.org/donate

And gerald, ignorant uneducated low information white people like you are bred to vote republican.....a party that has never done anything substantive to improve the lives of its voters other than to make poor ignorant white people feel better about their miserable state i.e. the perception that they are better than a black man. Gerald....another one of the deranged insecure ignorant white men who form the fast fading repub base. Sad idiots all.

Blacks are still modern day slaves on Democrat run blue city plantations. Blacks are bred and farmed for their votes. The Jews are levels higher in terms of intelligence than the average publicly educated black. I know that Israel will teach the filthy Muslims a hard lesson in the coming days. Time to pop some popcorn and watch it unfold.

Israel is an apartheid state, just as South Africa used to be. Exactly the same. In the west, any negative comment about Israel is considered "anti-semitic", the stock response when the oppression and genocide of the Palestinians is mentioned. As Israel tries to exterminate the Arabs in its midst, just like america, its biggest ally, the country is on a path to further chaos and self-destruction. And it is entirely plausible that this current conflict was intentionally started by Natenyahu to deflect from his personal troubles and distract the people. He has done the same thing before. Noone wins except Bibi!! All a part of his insanely self-serving plan, fully supported by the US. So continued lynchings and internal strife are inevitable in Israel.

Gerald do not let facts get in the way of your rant. Maybe you should look into who owned and ran the slave ships bring black to the USA. You can find that info at the Carnegie Institute. The jews took 110 million blacks out of Africa and stuffed them in the boats and sent them to New York harbor and a harbor in NJ. out of the 110 million only 11 million made it out alive on those trips, so that means your peaceful jews kilked 99 million people in the slave trade. But don't let facts get in your way

Isreal must take and occupy more land. Push Hamas further back. They also need to not end this campaign until Hamas is degraded to almost nothing. Forget what the media says and just wipe them out. An example must be set so others will think twice. Yes there will be dead child children but Hamas knew that when they started this war.