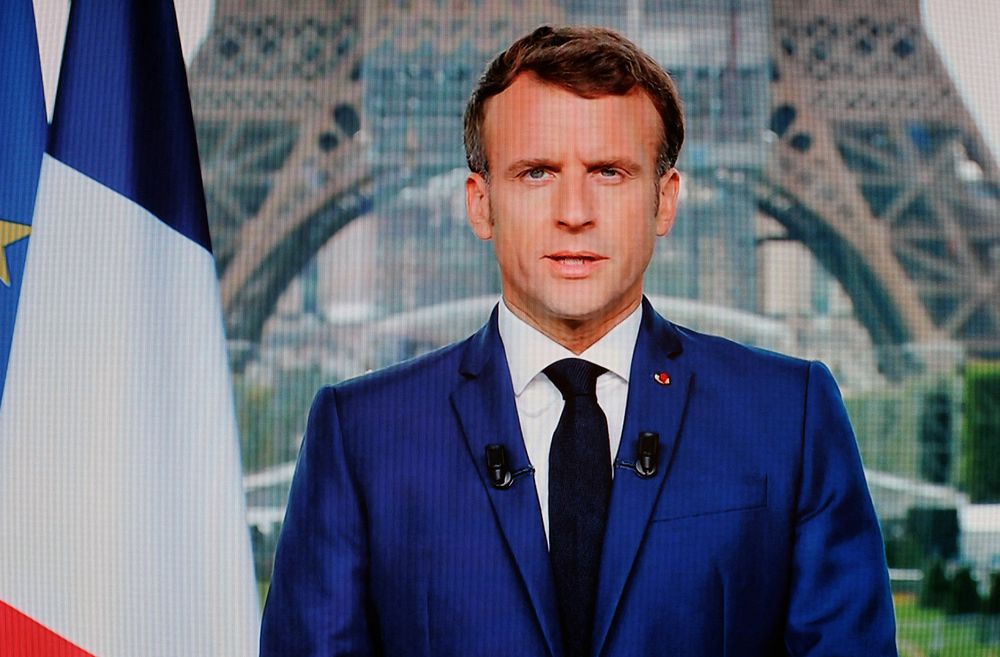 President Emmanuel Macron announced on Monday a set of measures to encourage the French to get vaccinated, including the use of a vaccination certificate to be able to go to restaurants or cinemas and mandatory vaccination for health personnel.

"We must move towards vaccinating all French people because it is the only way to get back to normal," Macron said in a speech broadcast on television in which he detailed new measures to try to stop the spread of the contagious Delta variant.

From August,  all French people must present a vaccination certificate or a negative covid test to be able to enter restaurants, cafes, shopping centers, hospitals, airplanes, and trains.

From July 21, all people over 12 years old who want to enter "places of leisure and culture" with more than 50 people, such as cinemas or theaters, must present this certificate.

Macron explained that the government's objective was to recognize the "civility" of those vaccinated, and "impose restrictions on the unvaccinated and not on all."

The French president also announced that vaccination against covid-19 will from now on be mandatory for all health personnel, employees of nursing homes, and those who work with fragile people.

"They will have until September 15 to be vaccinated", otherwise "they will not be able to continue working and will not be paid," said the Minister of Health, Olivier Véran.

"Our country is facing an increase in the epidemic throughout our territory, both in mainland France and abroad," Macron said.

The announcements represent a change of course for the French government after several months of the progressive lifting of restrictions and highlights concerns about the spread of the Delta variant.

The number of new cases in France has soared to about 4,200 a day, according to the latest official figures.

Infections could rise "above 20,000 at the beginning of August if we do not act," Health Minister Olivier Véran warned on Sunday.

The government is also going to hit the wallet to encourage the French to get vaccinated, starting to them pay for PCR unless they are prescribed by a doctor. They are currently free.

The prospect of having to be tested every time they eat or drink outside the home appears to have had an immediate impact on unvaccinated French people, as the website used to book vaccinations reported a significant increase in vaccinations. visits.

The Doctolib website indicated immediately after Macron's speech that there were 20,000 bookings per minute.

Around 35.5 million people - just over half of the French population - have received at least one dose of the covid vaccine, while 27 million have received two.

Haha! Happened faster than I could have imagined. Today, France is on fire!! Tens of thousands are rioting and protesting in Paris, Marseilles, and Nantes against Macron’s tyrannical Covid passports. Power to the people!!

Door To Door Vaccination Video https://youtu.be/h5jF5LhJ4ss | The covidSCUMbags who support and back this tyranny we all know they enjoy a video like this.

*** NOW ISRAEL KILL SHOT IS FAILING FORCE A 3RD KILL SHOT *** Those who took the KILL SHOT getting sick and dying. Reports the KILL SHOT is not effective against Lambada. This is a disaster. What next MORE KILL SHOTS...hhhmm the definition of insanity is to keep doing the same thing and expecting a different result. This KILL SHOT is NOT safe there are safe and effective treatments governments are guilty of crimes against humanity as they hide them to force now a dangerously deadly KILL SHOT! Israel the First to Move to Third Booster Shot for At-Risk Candidates https://trialsitenews.com/israel-the-first-to-move-to-third-booster-shot-for-at-risk-israelis/ | This is a mass genocide before our eyes as everybody now is dying and being injured where before covid was striking only high risk...this is SICK what is going on as young people and the unborn are murdered. Who can possibly support this evil?

There Were More COVID-19 Vaccine Deaths Last Week in US than COVID-19 Deaths — take a minute for that to sink in!

*** Government official on news admits "We know that double vaccinated, full vaccinate people are much more likely to get and carry coronavirus" *** Everything scientists have been warning about. Seems to me government is getting the walking dead ready for those who took the KILL SHOT to accept their death! https://www.youtube.com/watch?v=mM8P4tXJhoE | Everything is coming true, what is sad is still people on this site fighting on behalf of the criminals who are killing them and murdering children including the unborn ones!

MORE MURDER NEWS IN THE GENOCIDE *** 4 out of 5 babies murdered when woman received the KILL SHOT. 917 unborn babies murdered following covid-19 KILL SHOTS! They say the number is much larger but this is a small window of time being reported. MURDER GENOCIDE OF CHILDREN AND EVEN THE UNBORN NOW...HOW CAN ANY HUMAN BEING ANYWHERE SUPPORT THIS EVIL?

More Deaths Reported to VAERS Following COVID-19 Vaccinations Than for Any Other Vaccine https://thevaccinereaction.org/2021/07/more-deaths-reported-to-vaers-following-covid-19-vaccinations-than-for-any-other-vaccine/ IT IS TIME TO ARREST, PROSECUTE & EXECUTE EVERY SINGLE PERSON INVOLVED IN ANY WAY IN THESE CRIMES AGAINST HUMANITY!

DEATH IS COMING TO ALL WHO TOOK THE KILL SHOT! PREPARE YOU ARE THE WALKING DEAD! *** Over a dozen vaccinated doctors dead *** https://sg.news.yahoo.com/over-dozen-vaccinated-doctors-dead-160250258.html | Even the propaganda media is starting to report the endless death! Soon what will be reported is the KILL SHOT is the actual cause of death, they are hiding this from the general public but millions of doctors and scientists have spoken out about this fact. They lied to humanity when they told people fraudulently these KILL SHOTS gave 95% protection when it is published in The Lance to only be 0.8% to 1.3% which is NEAR ZERO PROTECTION but worse the KILL SHOT is murdering people daily at staggering levels across the world... in the USA ALONE last week over 2000+ were murdered! Read their stories in VAERS put in by medical professionals. This is only a fraction of those being murdered because doctors and hospitals are being told and threatened to NOT REPORT THESE MURDERS AND INJURIES. IT IS TIME TO ARREST, PROSECUTE & EXECUTE EVERY SINGLE PERSON INVOLVED IN ANY WAY IN THESE CRIMES AGAINST HUMANITY!

HERE IS A LESSON ON INFORMED CONSENT! LISTEN CAREFULLY! https://www.bitchute.com/video/aAmBeweyjoeq/ | Every person who took this KILL SHOT without receiving a proper informed consent has a legal right to file criminal charges. Those who have been involved in any way in pushing this KILL SHOT are violating many international laws, all 10 of the Nuremberg Code of 1947 and are criminals.

What they are doing is destroying every business on purpose to bring society to its knees, it is part of Klaus Schwab sicko plan with UN! Time to arrest, prosecute and execute these monsters of evil!

TIME TO ARREST ANY CRIMINAL INVOVLED IN THESE CRIMES. THEY COMMITTED FRAUD. PROOF YOU HAVE BEEN LIED TO AND DEFRAUDED BY GENOCIDIAL CRIMINALS! Remember being told by government and media you had 95% protection with the injection? Sorry if the truth hurts but here is science that proves you have been defrauded by criminals. | Lancet research confirms Injections offer NEAR ZERO PREVENTION or PROTECTION! Peer-reviewed research at The Lancet shows that experimental injections reduce your chance of catching COVID-19 by: Pfizer: 0.8%, Johnson & Johnson: 1.2%, Moderna 1.2%, AstraZeneca 1.3% per results published in the Supplemental Material PDF https://www.thelancet.com/journals/lanmic/article/PIIS2666-5247(21)00069-0/ | This science proves conclusively you have been lied to and deceived by a group of criminals. You have statistically near zero protection and worse expert doctors in vaccine development scientifically have proven that you have been ‘pathogenically primed’ for death. This is science that cannot be disputed. You would be best getting your affairs in order and working on your bucket list. Time is of the essence for you and all who have taken this KILL SHOT.

Note young unvaccinated US nurse dies from Covid only 24 hours after testing positive. She was in her 20’s or early 30’s and an adamant non Vaxer . Very prominent in social media and her family are devastated. More and more young people now in hospital and all unvaccinated. Remember also that 5% of Covid cases go on to get long Covid so now numbering in the millions. Long Covid is awful and of course in over 18 months of rubbish from GRU mouthpiece Avakian is never mentioned by him or Hogan

Excellent that France is showing the way forward on this. When all are vaccinated with the LIFESHOT we will all be in a safer place. According to GRU stooge Avakian (aka Brian) Florida is a great example we’ll take a look now as cases soar as they do amongst the unvaccinated US Population ….now spiking upwards because of Delta . We need to get everyone vaccinated with the LIFESHOT as quickly as possible to avoid variants being bred in people like Avakian (who incidentally was already fully vaccinated in the local Russian Embassy some months ago )

It’s encouraging to see a country put public health above freedom of stupidity.

This is is BS. the people that took the kill shot will live 2-3 year max. Then we all have better and healthier lifestyles for eating at home. The sheep will be dead and the healthy will survive. Macron was probably elected, just like traitor tradeau was thanks to dominion glitchware. They like to crank up the heat once in a while to get more sheep to agree to get the chip and have their lives shortened. Many have injected themselves with the poison without doing any do diligence...outside of google and youtube. There is many of us who don't care for the poison nor chip....so they have an uphill battle forcing us to comply. they will continue to crank up the heat to get more people to comply and therefore reach their desired population #'s. good luck getting the majority of us to get the poison injected. Like the song says "we are not gonna take it"

I wonder if the restaurants, pubs and cinemas are going to stand up to the government tyranny when their businesses tank? I could give a KUCK what these F'rs do...I am NOT GOING TO TAKE THIS KILL SHOT for something 99.9X% of the world lives and up to 10% of those taking the KILL SHOTS are being murdered and injured! Sorry that math does not work for the intelligent.

This is coercion and they will be put in front of firing squads for these heinous crimes against humanity. I expect the French military to step in before civil war outbreak as they have warned against this criminal. This is a deadly...very DEADLY KILL SHOT! They will be blaming all the death on new FRAUD variants but as we are already seeing most dying are those who took the KILL SHOT. Time to stand up Arrest, prosecute and execute every evil SOB involved in any way in this global genocide! This is disgusting. These are widely recognized criminals in many international courts because we know NEW CASES based on PCR testing is FRAUD! The courts in country after country have deemed this is FRAUD! MEDICAL MARTIAL LAW IS COMING https://www.bitchute.com/video/aao7nPOKnUnn/

Le Pen has has a couplr\e\

Pay no mind to what the French do … on a battlefield, they throw down their arms and surrender at the first opportunity. Look at the wimp they elected President. Useless but to be a Socialist.

And the daily increase will continue because the spike protein is variant just as you can see in many charts as the jabs go up to do the cases. 62 %of the people in England that are getting the Delta variant have been fully vaccinated. Israel is seeing the same thing. And how do you like your communist government now Mr Frenchmen.