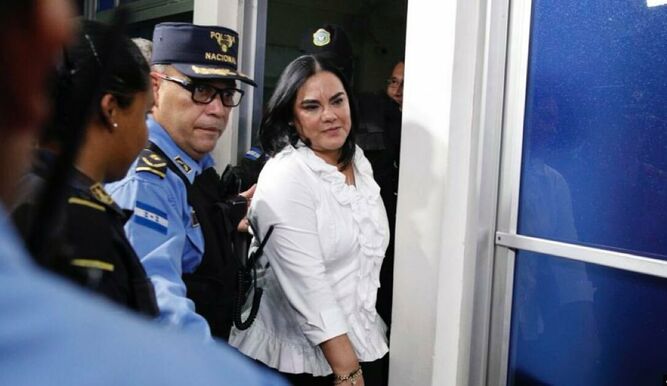 Off to begin 58 year prison term

Former Honduran first lady Rosa Elena Bonilla was sentenced on Wednesday, September 4, to 58 years in prison by an anti-corruption court that found her guilty of "fraud" and "misappropriation" of public funds during her husband's rule, Porfirio Lobo (2010-2014 ).

Bonilla, 52, was found guilty of the crimes on August 20. According to Honduran regulations, the defense of the former lady has 20 days to appeal the sentence. Bonilla was arrested on February 28, 2018, and has since been held in a women's prison in Támara, 10 km north of Tegucigalpa.

The prosecutor's office, in collaboration with the Mission to Fight t Corruption and Impunity in Honduras (MACCIH) accused the Bonilla of diverting the equivalent of $510,000 of public funds five days before Lobo left power on January 27, 2014. Lobo publicly accuses the current president Juan Orlando Hernández of inducing the courts to condemn his wife. Hernández and Lobo belong to the National Party but are confronted after the former president criticized the management of the current ruler and urged him to resign.

The MACCIH was created by the Organization of American States (OAS) in January 2016 to collaborate with the local prosecutor's office in the fight against corruption in Honduras. In Panama, former officials who have stolen millions, still walk the streets.

Pompeo tightens screws   on Cuba,  Panama seeks...
0
Wuhan  shows there is life after COVID without  ...
0
WORLDVIEW: Putting  end  to viral  pandemics
7
WORLDVIEW: Where do we go from here?
3

Panama loves corruption. The people whine but don't really complain because every one of them would do the same thing given the opportunity.

George Klk...You are 100% correct. I think corruption is now an irreversible part of the national identity of Panama.