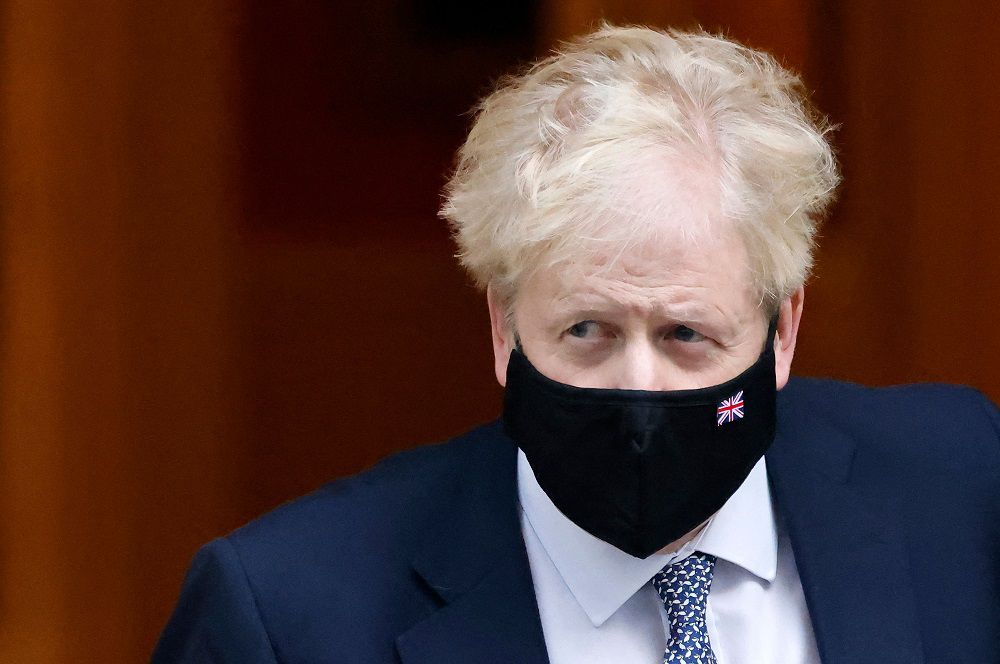 Power for the ake of power

By Otto EnglishI’ve lived in London my whole adult life; I’ve witnessed IRA bombs, terror attacks and riots; but I’ve never observed such palpable unease as this. There’s a deep sense of foreboding, a tacit dread of the tsunami moving inexorably toward us. My local supermarket, like others across the country, has seen wholesale panic-buying. On my last visit, many shelves and fridges had been stripped bare. In coronavirus Britain, “keeping calm and carrying on” is in ever more dwindling supply than toilet paper.

Many Britons retain an unhealthy obsession with the war that coined that iconic phrase. During the Brexit years, the populist right had a fondness for invoking wartime Britain whenever some obstacle was put in the way of their sacred sovereignty. No-deal Brexit would be just fine, because “we” had survived Dunkirk and won the war with pluck, ingenuity and Spitfire planes.

As the current crisis has unfolded, they have been at it again. Politicians and conservative pundits have busied themselves cooking up batches of Britain’s magic potion, the fabled “Blitz Spirit,” to ward off the virus. Hitler’s bombs were an unwelcome inconvenience, but after the Luftwaffe had done their worst, we Brits simply dusted ourselves down, picked the rubble out of our cups of tea and carried on. Or so the story goes.

The outbreak takes a hand grenade to the conceit that everything is going to be alright — and thus it presents a very real threat to politicians like Trump and Johnson.

Stoic Brits
Geneticists have, as yet, failed to identify the DNA strand innate within the British race that makes us more stoic than everyone else, but that doesn’t stop many believing in it. For such people, you would think that the arrival of the coronavirus on these shores would be a blessing. Here is an opportunity to show the world what the U.K., newly reunited with its enchanted blue passports, can do. Here is a chance to validate our matchless ability to rise above catastrophe, just as “we” did in the war; and in Boris Johnson we have an ersatz Winston Churchill, ready to take on the job.

The similarity between Johnson and Churchill has long been cultivated by the current PM. When he was mayor of London, he even wrote a book called “The Churchill Factor” in which he hammered the parallel home, with all the subtlety of a pneumatic drill. But Johnson is no Churchill. For all his many failures, Winston was a natural leader, who could devour detail at a ravenous pace and who was constantly brimming with ideas. Boris’ aides have been told to limit briefs to no more than two sides of A4 paper, and even his ministers admit that, having got into Downing Street, he has no idea what to do next.

Johnson might be a great turn on panel shows, but his unexceptional career in politics demonstrates a lazy man of limited vision, singularly unequipped to the task of steering the nation through a crisis. Like U.S. President Donald Trump, with whom he has far more in common than Churchill, Johnson is a celebrity politician whose electoral success is symptomatic of a different sort of virus. That disease is called populism, and much like coronavirus, it is nasty and rampant and has triggered the unsolicited self-isolation of a nation.

There’s a general acceptance that Brexit and the election of Trump were both, in part, side-effects of the fallout of the financial crisis in 2008. Ordinary people wanted to teach the elites a lesson. But that was not the whole story.

America did well in the Obama years: The U.S. economy grew steadily during his terms of office and continued to do so through three years of Trump. As of December 2019, the U.S. was in its 11th consecutive year of growth. At the time of the Brexit vote in 2016, median incomes in the U.K. were on an upward trend, unemployment was at a near record low and the country had the fifth best performing economy in the world.

Ironically, it was that very sense of economic exuberance that made the terrible decisions in the U.S. and the U.K. possible. As economies boom, perceived inequality is more keenly felt as the gap between rich and poor widens, offering fertile ground for populists.

But even more crucially, the twin indulgences of Trump and Brexit could only have happened in advanced, wealthy countries where a good proportion of the people felt secure enough to take the risk on political wild cards. Those who voted for Trump, Brexit and Johnson did so sensing that things could be shaken up a bit and everything would still be OK.

Hand grenade
Enter the coronavirus. The outbreak takes a hand grenade to the conceit that everything is going to be alright — and thus it presents a very real threat to politicians like Trump and Johnson.

The essence of modern British and American populism is big personality politicians promising quick-fix solutions to complex or confected problems. It’s an approach that has its appeal in the good times, but when a proper emergency unfolds, populists and their crowd-pleasing politics are quickly exposed as ill-equipped to deal with the fall out.

Both Britain and America’s responses to the coronavirus crisis have been disastrously muddled and confused. As events unfolded, an off-kilter Johnson increasingly seemed to be ducking out of sight. When he did appear, on ITV’s “This Morning” to appeal for calm, his muddled performance only made matters worse with a segment in which he appeared to suggest that the nation could “take it on the chin” being subsequently widely shared on social media. Although taken somewhat out of context, the clip added to the general mood of confusion and anxiety

The virus has no respect for borders, blue passports or sovereignty. It demonstrates, fundamentally, that we live in an interconnected world.

Health Secretary Matt Hancock was later obliged to distance himself from Patrick Vallance, the country’s chief scientific adviser, after Vallance suggested that if 40 million Britons caught the disease “herd immunity” could be achieved, neglecting to mention that an estimated 250,000 might die in the process and that the NHS would be overwhelmed.

Whitehall, meanwhile, has been accused of dishing out contradictory advice from frequently anonymous sources, which has compounded confusion, fear and uncertainty.

Seeking to reinforce his Churchillian credentials, an embattled Johnson subsequently sought to go on the attack, declaring war on the virus and seeking out manufacturers who might be able to repurpose factories to produce ventilators at speed, much as firms in wartime Britain turned production of furniture over to the making of the De Havilland Mosquito plane.

Johnson’s new tack backfired when it was reported that he had joked to 60 business leaders in a conference call that he is dubbing the strategy “Operation Last Gasp.” Johnson’s diminishing band of supporters claimed that this was a classic case of “British black humor” but very few people were laughing.

Some measures to mitigate the crisis, such as a £330 billion package of loans and extended credit, have been welcomed. But others, including the rushed Coronavirus Bill, have been greeted with concerns about their long term democratic implications. Worse still for Johnson, his every appearance alongside the calm and sincere Chancellor Rishi Sunak, who appears fully on top of his brief, makes the prime minister look like a startled political minnow.

In the U.S., meanwhile, Trump’s chaotic and self-promoting leadership style has become ever more out of step with the increasingly paranoid mood. His illogical and inconsistent travel bans, the calamitous lack of testing and constant U-turning have caused disquiet and fear in a country that still shockingly lacks proper universal health care.

Both Trump and Johnson wanted power for power’s sake and were willing to get there by any means. In pursuit of it, neither demonstrated any respect for the truth. By December 2019, the Washington Post estimated that Trump had told 15,413 lies during his time in office, averaging 14.6 lies a day.

Johnson, too, has carved a career out of deceit. During the EU referendum, he headed a campaign that enabled an environment where expertise was snubbed, fake news prospered and where vital EU workers, including doctors and nurses, were driven away.

And yet all of this might still have an unexpected, long-term outcome; for while nobody in their right minds would welcome the spread of coronavirus, it could eventually bring about the death of populism.

This crisis is a wake-up call to us all. The virus has no respect for borders, blue passports or sovereignty. It demonstrates, fundamentally, that we live in an interconnected world; that we need nations to work together in times of crisis as well as times of peace, and that to achieve all of the above we need serious, sensible politicians of good intent at the helm.

In the meantime, as the self-promoting popinjays in Downing Street and the White House plough on, let’s just hope that there are enough experts and grown-ups left to take back control from the virus.

To "oh ya", for maga-minds the truth is always difficult to digest, let alone understand. Right before our eyes both of these moppy headed fools, don and boris, are both becoming responsible for the deaths of many of their citizens. Their incompetence is glaringing obvious yet you and all the rest of the lemmings are still willing to dive blissfully over the cliff to the tune of their ignorance. This disaster, in any sane world, would definitely signal the end of both of their political lives. But as I have said before in this forum, the US, and the UK apparently now too, are both populated by some of the most ignorant and myopic people in the world today!! What's worse is that they actually chose ignorance over knowledge based on their inherent love of a supposed "stable genius" who proves every day just how ignorant and small men they really are. This task is so far beyond their capabilities and the world is paying the price for it. SAD!!!

Acouple of points. Its nice to see left wing newsroom panama has nothing to report avout in panama thus having time to bash trump. And 2nd for years anyone who did any prepping was clased as a nut job. So as you use your finger think of us that are not and thank your lucky stars we are not also at the store buying food. So otto you can stip crying like a little school girl and put on your big boy pants