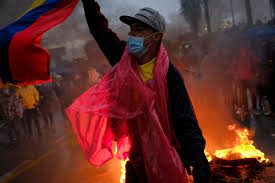 AFP – A proposed tax hike for the middle class turned into a major movement against the government of Colombian President Iván Duque. Below is  the timeline of   the brutal confrontation leading to at least 60 deaths over 100 “disappeared” and over 1,300 injured

April 28, with the country at the deadliest moment of the pandemic, tens of thousands took to the streets to protest against a tax reform that they considered damaging to their pockets.

The Duque government wanted to lower the minimum taxable band, which was about $1000, to $656 per month.

Two days later, troops were dispatched to the streets of Cali, the third-largest city in the country and the epicenter of the rebellion against the reform.

Duque gave in to the pressure of the streets and announced the cancellation of his plan. Instead, he said he would proceed to temporarily increase taxes on companies and higher-income groups. However, tens of thousands remained on the streets for the fourth day in a row.

Duque says that he will use "military assistance" to confront "those who, through violence, vandalism, and terrorism, seek to intimidate society."

On May 3, the Ombudsman says that five days of protests left at least 18 civilians and one police officer dead and 846 people injured.

On May 4, the United Nations and the European Union condemn what they consider to be excessive force on the part of the security forces.

Roadblocks delay fuel deliveries and fears are growing over the supply of oxygen and medicines for Covid-19 patients.

The crisis increases and the president supports the security forces. In Bogotá, 16 police stations are attacked.

On May 5, protesters protest against Duque's policies on health, education, security and violence by the security forces. Police manage to stop protesters from storming Congress. Complex dialogue

The next day, the government invites the leaders of the protests to dialogue, but they call for new demonstrations.

Two days later, violent protests erupted in Popayán, in the southwest, after a 17-year-old girl committed suicide while in detention.

On May 20, Conmebol gave up holding the Copa América 2021 in Colombia, the largest competition in continental football. The entity made the decision citing "reasons related to the international calendar and logistics."

On May 23, Pope Francis demands a "serious dialogue" and defends the right to peaceful protests in Colombia.

Duque announces the deployment of troops in Cali on May 28 when new clashes leave at least 13 dead.

On May 30, the UN High Commissioner for Human Rights, Michelle Bachelet calls for an independent investigation of the violence in Cali.

On the same day, the government resumed talks with protesters when the death toll for the month reached 59, including two police officers.