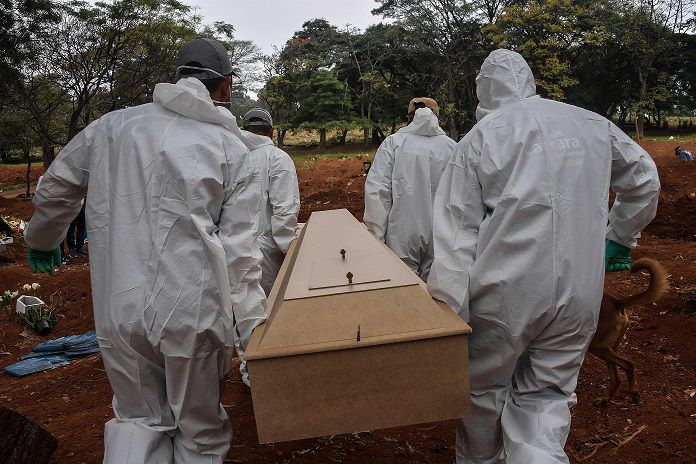 The coronavirus advances inexorably in Latin America, with close to 640,000 cases and more than 35,000 deaths, leaving bleak forecasts in economic and employment matters, as Europe slowly comes back to life and China prepares to sing "victory" against the virus.

The number of cases in the world multiplied by two in a month, with an acceleration of infections in Latin America and the Caribbean, exceeding five million infected on Thursday, according to the latest AFP count based on official sources.

The pandemic will leave 11.5 million new unemployed in 2020 in Latin America, an increase of 3.4 percentage points, which will bring the total number of unemployed to 37.7 million people, according to a report by the Economic Commission for Latin America and the Caribbean (Eclac ) and the International Labor Organization.

The economic contraction in the region will be 5.3% this year -the worst since 1930

Brazil, one of the countries in which the pandemic grows fastest, exceeded 20,000 deaths from coronavirus on Thursday, after reaching a daily record of 1,188 deaths.

The South American giant is also the third country in number of affected, with 310,087 cases, behind the United States and Russia. The number of infections could be, however, up to 15 times higher, due to the difficulty of having accurate statistics through lack of tests.

Bolsonaro virus
The crisis occurs in a context of strong political confusion, due to disagreements between the majority of the governors, in favor of confinement measures, and the far-right president Jair Bolsonaro, who.

The two sides sought a truce this Thursday during a teleconference in which Bolsonaro and São Paulo governor Joao Doria tried to tone down the confrontation.

Doria, in previous days said  that the country faced both the coronavirus and the "bolsonarovirus" at the same time.

In the largest cemetery in Latin America, in Sao Paulo, the rhythm is frantic. "Our average was 30-35 [burials] daily; a strong day, 45. We are currently burying 60," says James Alan, supervisor of one of the gravediggers teams at the Vola Formosa cemetery.

In Peru, which exceeds 108,000 infections and 3,000 deaths, the Ombudsman Office warned that Lima's hospitals are about to collapse and reported that medical equipment, personnel, beds, ventilators, oxygen, among other supplies, are lacking.

"It is like a horror movie, inside (of the hospital) it seems like a cemetery for the corpses, the patients die in their chairs, (or) in wheelchairs," nurse Miguel Armas, of the Hipólito Unanue hospital , told AFP from Lima.

Ecuador , with almost 35,000 cases and 3,000 dead, began its lack of confinement on Wednesday, but faces a new problem: two thirds of the inmates of a prison are infected.

Guatemala, where a new law requires the provision of basic public and private services in the face of the pandemic, rebuked the United States for deporting sick migrants with Covid-19.

I dont understand why we are hearing about all of these deaths in the hospitals, clinics and nursing homes but never in the prisons. If 2/3 of the prison in Ecuador has it, then why are they not dying? Or are they just not reporting it?

These countries have very large slum areas. Brazil will achieve herd immunity soon like Sweden has. The virus will will cull the sick and weak like nature has done since the dawn of time. People who have abused their bodies with alcohol, sugar, fat, drugs and obesity better get right with God or learn to wash your hands before eating! Potbellied men are a main target of the virus and that's 90% of the old gringos that I have seen in Panama.