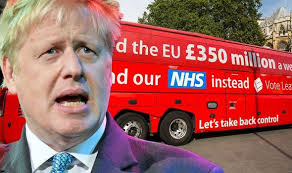 Johnston and his campaign bus

Former British Foreign Minister Boris Johnson, until today the front runner to replace Theresa May as UK prime minister  will have to appear before a court for having "lied" during the "Brexit" campaign, saying that this country allocated to the European Union (EU) 350 million pounds (396 million euros) a  week,

On   Wednesday, May 29 . Johnson,  faced s a private accusation filed by activist Marcus Ball who . accuses the former mayor of London of "misconduct in public office" for the assertion.

The lawyers representing Ball requested that Johnson be held accountable before a court, arguing that the conservative politician deliberately misled citizens during the campaign prior to the European referendum held in 2016, in which the "Brexit" option triumphed ( exit of   the country  fom  the community block) triumphed.. Also, according to the accusation, the British politician reiterated that same message during the general elections of 2017.

In communicating her decision in writing, Judge Margot Coleman indicated that Johnson will be called before a court for "a preliminary hearing and later the case will be sent to a court to be tried." The judge said that "this is an exceptional and unusual request with considerable public interest." In order to pay for the private accusation, Ball launched a popular microfinance campaign, which has raised more than 200,000 pounds (226,770 euros).

Johnson's team considered that the request for the conservative politician to appear before a court is motivated "for political reasons" and recalled that it has been presented by a limited company - "Brexit Justice Limited" - which is "product of a campaign to undermine the outcome of the Brexit referendum and / or to avoid its consequences. "

Quite a concept: holding politicians accountable for their lies. Truth be told, there would be pols from both US parties facing penalties under this standard.