After fires  surviving Koalas could be endangered species 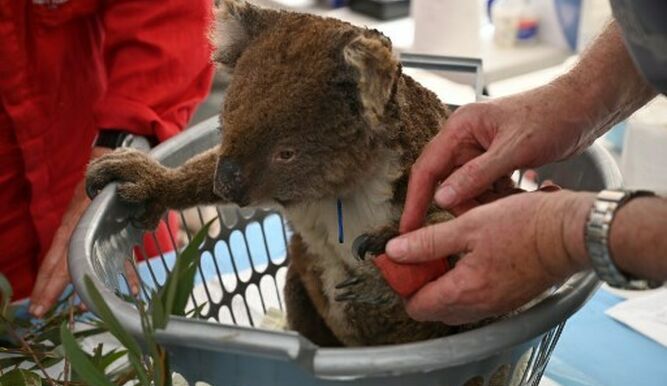 Dozens of koalas injured in the fires that devastate southeastern Australia arrive daily at a makeshift animal hospital, in the natural park of Kangaroo Island, in the south of the country, many of them clinging to the neck of their rescuer.

All of them have suffered forest fires that have devastated the wildlife refuge, off the coast of the state of South Australia. Many of these marsupials require urgent treatment and veterinarians and caregivers do not even have time to give them names, and simply refer to them with numbers.

Among them is the Koala number 64, which arrived with burns on all four legs. To be operated on a surgical table, located in an already crowded tent, the koala had been sedated so that its wounds and burns can be healed. "He is recovering very well," says veterinarian Peter Hutchison after the intervention. But not all koalas are so lucky. Many of them have been found in such a bad state that it was necessary to sacrifice them.

Steven Selwood, head of the emergency veterinary team of the state of South Australia, says it is believed that there were about 46,000 koalas on the island before this year's fires were declared. Now there would be about 9,000, according to Selwood, who considers the loss of the marsupials is "devastating."

"The fires were particularly fierce and fast (...)," he told AFP. "A lot of wildlife has been cremated," he laments. Australian Environment Minister Sussan Ley said the population of koalas in the country has suffered an "extraordinary blow" due to the forest fires that have ravaged the country for months and suggested that they could be considered as a species for the first time "in danger". Kangaroo Island is the only place in Australia where the animal population is free of chlamydia, a sexually transmitted infection, which is also found among humans and is fatal to koalas. This is a "guarantee" for the future of these marsupials.

Over 3,000 including children displaced in narco ...
3
Meghan’s father could testify against her say UK...
1
WORLDVIEW: Thousand die but Ukraine paradox live...
0
After fires  surviving Koalas could be endangered...
0
WORLDVIEW: Three thons in Cgina's side
1