Wuhan  shows there is life after COVID without  masks 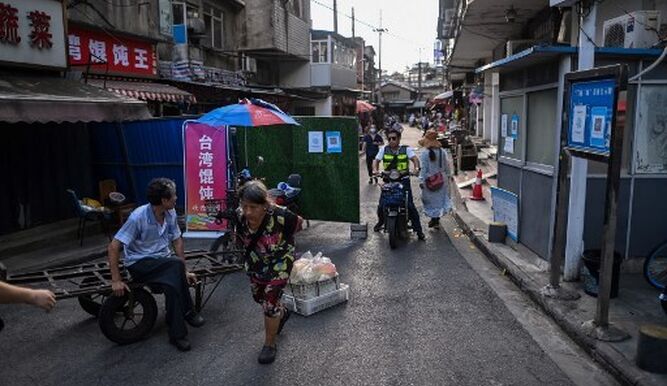 In the heart of China, his city was the first on the planet to be quarantined. But six months later, the inhabitants of Wuhan are enjoying the return to a normal life, to such an extent that many of them do not hesitate to put the mask aside.

Young people dancing at a techno party crowded food stalls and traffic jams everywhere: the landscape of Wuhan (center) no longer has left behind the ghost town atmosphere that the shores of the Yangtze have experienced since January 23.

The metropolis of 11 million inhabitants lived through harsh 76-day confinement, finally lifted in early April. But with the disease nearing disappearance across the whole of China, movement has taken over the streets.

thousands of Wuhan people line up every morning in front of caravans selling breakfast. A scene that contrasts with the crowds that flocked to city hospitals during winter, distraught over the new coronavirus.

While the mask is mandatory in Berlin and Paris, in Wuhan the symbol of the pandemic, as well as full suits and safety glasses give way to umbrellas and sunglasses. These last days the temperatures reached 34 degrees.

Tourists returned and were photographed smiling in front of the Yellow Crane Tower, one of Wuhan's iconic landmarks, with its red and orange crafts.

Closed market
But the return to normality is not complete and economic activity continues to be affected. "In the first half of the year, we only reactivated certain projects that were planned

before the epidemic," Hu Zeyu, an employee of a real estate agency, told AFP. "The volume of business was strongly reduced."

"But they are not going as well as I imagined," he says.

Among the first contaminated people in Wuhan, many worked at the Huanan Fresh Market, which was closed by authorities in early January.

Left to abandon behind tall blue bars, it has not reopened. Some vendors reinstated their stalls further afield.

After the deconfinement, Wuhan took the time to recall its trauma. At the Museum of the Revolution, an exhibition on COVID-19 presents objects representative of the fight against the pandemic. Visitors can see full-body suits with dedications that were worn by health personnel during the crisis.

Many in Wuhan now say they want to enjoy everyday life. "Now, I enjoy each day as if it were my last," declares a local named Hu Fenglian. "I don't feel like worrying too much."