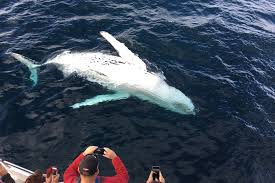 July is not only the month when the newly elected administration takes over, but it is also the start of the whale watching season which lasts through October on  Panama’s Pacific coast as humpback whales begin their journey from the Northern and Southern Hemisphere to Panama to have their young.

The  warm waters  of the Gulf of Chiriqui, Herrera and Los Santos, are some of the areas where the marine giants  can be seen

Mothers feed whale calves over more than 80 gallons of milk a day. and they teach their young to swim, dive and breathe.

When the calves feel strong, they start a long migration to Antarctica.

According to the Tourism Authority of Panama, between July and October, more than 2,000 whales travel from the south pole to the Panamanian Pacific.

Whale watching is an activity that brings more than 15 million tourists and generates more than a  billion dollars a year, from the activity and the accessory services that it generates.
whake-watching
Share
Previous Post
Panama stopover plan drawung tourists
Next Post
1000 Polleras Parade adds millions to local economy