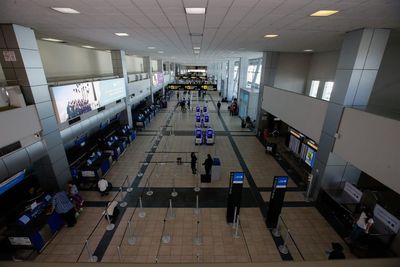 Panama ban  on international flights  has been  extended until June 22, "for reasons of public health."

The measure was announced on  Friday, May 15 by Gustavo Pérez Morales, director of the Civil Aeronautical Authority (AAC).

Humanitarian flights and those that transport equipment or supplies necessary to face the coronavirus pandemic are excepted.

Commercial and passenger flights have been prohibited since March 23 and were to restart on May 23. On  Friday, the AAC decided to extend the measure -at least- for 30 days.

This suspension involves changes to the schedule of the Panamanian flag line Copa Airlines, which has its hub at Tocumen Airport, the country's main airport.

Copa Airlines had previously announced that it was restarting operations on June 1.

Air transport is included in the fourth block of activities within the government plan for reviving the economy.

On  Wednesday, the first block started with electronic retail stores, workshops, and other services. The other blocks do not have an effective date.

People of Panama, rise up and open your lives and your businesses. You are being lied to and it is sick of them and they are RUINING YOUR LIVES

Look at the death rates from Flue. Corona virus is about 30% of those numbers are overblown. Up hear in the U.S. Basically someones not telling you the truth.

All I can is when this country goes bankrup this Goverment will wake up but by then it will be to late!!!

Let's all stay home, go broke, and starve to death. We'll all die but, at least it won't be from Covid 19.

@Captain: "You" Panamanians should have taken your heads out of your own asses A LONG TIME AGO. It is very easy to blame others for own failures. The average citizen is not even intelligent enough to realize that there is no punishment from "God" because someone decides to be gay. As long as people in this country think backwards, the 3rd world status is well deserved.

Pedro, give it a try over here under the Trump regime...

This is great news and something we Panamanians should have done earlier. Traffic through the airport and the importation of the virus from Europe is what got us into this mess. Countries that acted quickly to stop air flights ...think New Zealand ..are out of it . Those like UK that left it too late or in fact never even imposed it have some of the worlds highest death rates. Keep it closed please. Anyone wants to leave can trek across the border.

Mr. Cortizo, Ms. Turner serve your country and Not WHO !

Mr. Cortizo, Ms. Turner serve your country and Not WHO !

The embassy has got to set up some humanitarian flights out! It's inhumane to expect people to stay trapped in today's communist Panama! Contact your embassies and request help to escape this imprisonment!

Civilization has survived at least 6,000 years without this nonsense. Couldn’t this government leave us alone for just one more 1,000 years. We will do just fine.

History will show a Dictatorship is following the Noriega Regime. It's the Cortizo Regime. Much less cases ( they are all provoked by unlawful lockdowns jail like enforced) but the hushmoney this Regime get from the WHO orders an extended needless international flight lockdown. Panama is now a no go area for a long time. No landlord will get his rent no lawyer can any longer work by law no economy is existing except ther canal but the poors never saw canal money and why? Because of a stupid kettle farmer. The money bringer the foreign communities are empty now and will not refilled any time soon. They can fill up with cows ( Nitto know this species) Why you Cortizo don't surrends yourself the justice today. You will anyway end up in jail sooner or later. Free the Panamanians and lock yourself up in the next jail. You would do all of us a favor.