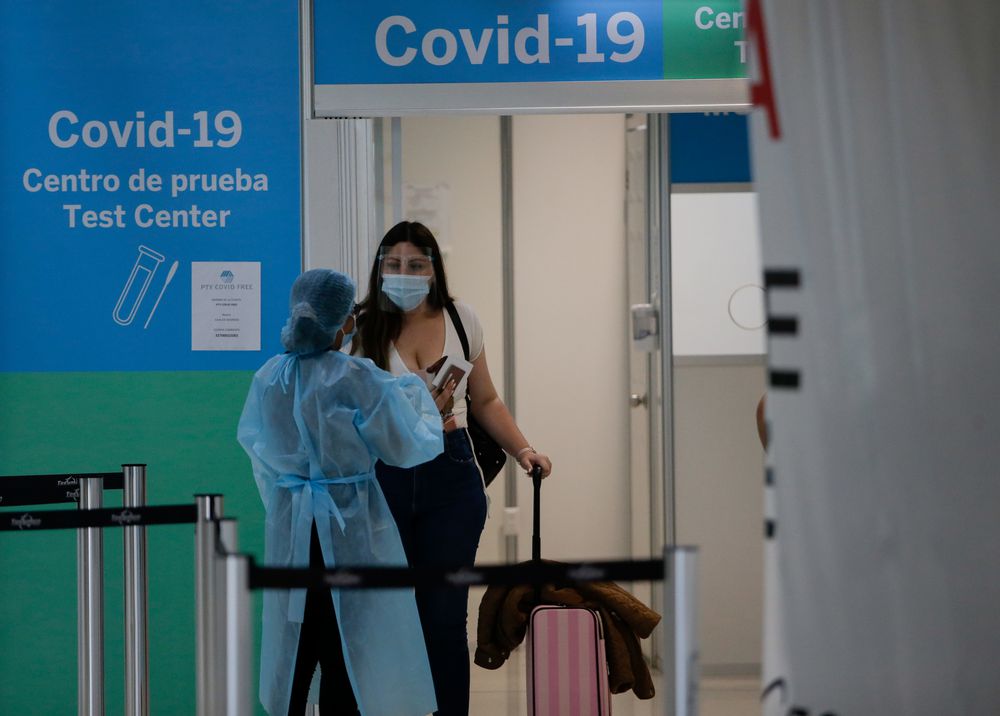 In the opinion of the union, the survival of the industry, the economic recovery, and  exposing the country to greater isolation is at stake.

On March 27, the Government revealed that it prohibited the entry of travelers from South America, allowing only Panamanians and resident foreigners to arrive from this region.

Then, through an Executive  Decree, it was specified that any person, who has traveled from or transited through South America by air, land or sea, using commercial or private means must present a negative test for the PCR virus or antigen administered 48 hours before arrival.

The rule,  came into effect on Wednesday, March 31 at 12:00 am, orders that in addition to the negative result presented when the traveler from South American lands, a PCR or antigen test must also be carried out, prior to the registry in Migration.

If the test result is negative, the person must serve five days of isolation, which in the opinion of those who participate in the industry will cause cancellations of flights and scheduled reservations, because no one who is not sick is willing to remain isolated in a country they visit.

The Association described the measure as unconsulted and improvised, which “adds to other mistakes to put the national tourist infrastructure on the brink of its disappearance. "The damage caused to the entire country has been immediate and cannot be overestimated."

The hotels warn that the closure of Panama to visitors from third countries who are alien to the Brazilian variant would mean a new blow to the more than 100,000 Panamanians who hope to return to their jobs.

In this sense, Apatel requires the government to nullify the generalized measures and replace them with effective methods focused on Brazil.

It asked that the role assigned to the Ministry of Health be rethought, considering that it has become the director of the national economy when making commercial decisions when it should be an advisor to the President of the Republic in health matters.

"Its destructive role as the ultimate director of economic survival issues must cease," the union emphasized.

On this issue, they asked to designate the Ministry of Commerce of Industries to lead the national economic reconstruction process together with the President, including the safe reopening of the different economic sectors.

Before the entry of travelers from South America to Panama was restricted, the airline and tourism industry, sectors that before the pandemic contributed together 11% to the gross domestic product, predicted that the recovery will be slow based on the results of these activities in the first two months of the year.

In February, passenger traffic through the Tocumen International Airport totaled 376,182 people, 71% lower than the same period in 2020.

Jill, Jill, Jill slow down! Now I understand you. I have spent many wonderful times in Cuba and have many friends there. So I assume that you are one of those extremely angry and irate white priviledged cubans whose wealth was confiscated and redistributed under Castro. So you I am sure would never ever recognize that you too most probably practised outright and implicit racism in your entire time in Cuba. So it is very easy for you to transition into the same system in america, the bastion of white priviledge. I am not a racist as I have never been in a postion to exercise racism. Obviously you are, but your ignorance and inherent prejudice does not even allow you to truly understand what the word means. Cuba practices prejudice even AFTER Castro. Just as your home( the Villages e.g.) most definitely practices it. So while your whole existence is likely steeped in racism and your anger is so typical of a displaced priviledged white cuban, I cannot take you seriously in the least. Your vision is so clouded by a damaged soul and mind, that you can only be the angry and miserable and unbelieving idiot who epitomizes the absolute worst of america. Enjoy your life. That's is the most that I can hope for you. Because true human happiness and self awareness will continue to elude you. I am done with you!!

Ajd You think a Latina cannot be a proud republican or proud American. You think a Latina cannot own property in Naples? You are racists. I never brought in color but you did. I talked about communism and the sickness of it. I am from Cuba you fool and I know what I see happening in America and the world because I already lived through this hell before so you better understand fool I know what I am talking about but you surely don't! Better wake up fool as people like you are blind to this disease. The real disease is communism and authoritarianism sweeping the world as peoples heads are cracked open by police for standing up for basic human rights and dignity...but fools like you probably have no clue this happening across the world. Coronavirus is the cover fool I can see it clearly as I escaped it. Start digging you fool. Here is your first clues...Great Reset by WEF and Klaus Schwab a nazi bastard is not so great for you or I. This has nothing to do with color. Next time don't be so prejudiced as it is blinding you to the truth! Open your mind and really do the research I am asking you as I know what I see is repeating, except globally! It is scary to me and my family but I am enjoying for now at least my paradise.

Jill, after that trumpy brainwashed diatribe, you killed it with "this was dictated". Is that just another symbol of your "exceptionalism", or perhaps of arthritic deterioration? You are clearly among the dying breed of white americans who, even in the best of times, which these are clearly not, look down your pale noses at all those who don't look like you. Tell me you didn't buy your condo in Panama as a direct response to seeing your last principled President was a little darker than you. And that your comfort level rose when the orange dotard came on the scene. I generally try not to engage with idiots as ignorance is your comfort zone. Yes, many people who have died(550,000) had health problems, but the latest morbidities are indicating otherwise healthy people. So Jill, I am happy that you and the rest of your "white power" blue hairs remain healthy, just please don't be surprised when your priviledged bubble world is flipped on its head. Understand that your mini-me trump, disantis, has been proven to have lied about deaths in florida. So you can be sure that he will lie again to spare himself the shame of being proven wrong....at your expense. Finally, you truly need to come into the real world, as difficult as that may be for you. There really is no such thing as communism any more, especially not in this part of the world. There are just groups that obviously care more about others than obviously you do. You are the typical blinded, prejudiced and yes..racist white people who are the hallmark of a dying culture. Just be thankful that as you say, you are old, so you won't be around to see your grandkids or their kids no longer looking like you, but like the beautiful brown skin of the fast emerging majority in your country. Your people are aging and not proliferating like people of colour. So enjoy your last gasps and be thankful that after 400 years, people of colour are only seeking equality, and not revenge. I wrote this! Not dictated!!!

Jill, Florida is a breeding ground for the virus and with spring break parties and local deniers it’s spreading the virus all over the US. What a reputation to be proud of ! It’s now going to be a race between the vaccines and P1 in the US. Let’s hope the vaccines win out because given the staggering death figures in the US you should be hanging your head in shame not lecturing us here in Panama. It’s because of naysayers like you and Brian aka Alexandre Avakian , that we are in this mess in the first place. Your constant failure to abide by elementary health guidance advice and pushing unproven medications has resulted in many health facilities being overwhelmed and nursing staff being brought to their knees. SHAME ON YOU.

Jill, you should change your name to Brian!! Florida will soon be another Brazil!! Another symbol of american "exceptionalism". Exceptionally bull-headed and ignorant. I have a daughter working in a major hospital in Florida and these last 2 weeks have seen a significant and ever-increasing rise in cases of the Brazilian variant in Florida. The only difference in Florida is that you have a governor who is just like, I am sure, your god... Humpty the trump...he lies about everything and arrogantly thinks that his way is the only way. So while everything is open, there are no mask mandates and the fool beats his chest as he praises himself like an even more deranged mini-me orange dotard, people like you....you know..."exceptional" americans....are stilll and continuing to die in increasing numbers. But hey....you have your much vaunted american freedom that really only allows you to daily spout your igmorant drivel while the bluehairs all around you are dropping like flies. I am probably not wrong that you are one of those trump lovers who will "never get the vaccine"!! As to Panama, unfortunately we have now the Brazilian variant in low but increasing numbers, so please do never come back to infect us more. And yes, you will likely lose money on it....lesson learned. But Panama will survive despite the pushback from idiots like you and Brian. It will be difficult, but beating this virus will not be easy. Panama has beaten worse. Hell, after many more years, we finally kicked your mangey infected gringo butts out of the canal. We have problems, but america has so many more. As the world watches, your country is very quickly dissipating into violent tribalism with little hope of stopping because of myopic partisan minds like yours and so many others just like you. In a time when so much real knowledge is at your fingertips, you consume the inflammatory flatulence of tucker carlson, insanity hannity and ingraham as your daily bread. I said in the beginning...america...the land of the ignorant.....you just don't know...and you choose that..daily. Sad!!

As idiots destroy Panama and most industries and jobs, there will be NOTHING LEFT TO PANAMA WHEN THEY ARE DONE DESTROYING THE COUNTRY! Here in Florida people enjoy normal life. Partying, no masks, drinking, nightclubbing until 4AM, restaurants packed, parties, children in schools with no masks fun on the beach and packed stores. Just so people know there are places that are not INSANE and hell bent on destroying all businesses and life. The only SOB"s destroying everything are drinking the kool-aid by a Nazi Klaus Schwab of the WEF. It is disgusting at this point. Governments that are destroying the people must be removed now by the people. They are nonessential and no longer serve their purpose and shown themselves as combatant enemies of the people they are illegally destroying. We have our condo up for sale in Panama and don't plan on coming back! Just hope we don't lose a lot of money. What a twisted situation. Time for revolution globally. Florida shows this is a fraud and the world starting to discover that too.