Europe extends   travel welcome mat to 15 countries but not US 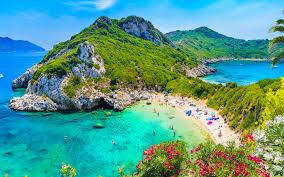 The Greek Island of Corfu is open for business

The European Union has reopened its borders on Wednesday to visitors from 15 countries, but  not to the U.S. where deaths from coronavirus continue to spiral  upward with the toll  nearing 128,000

The list of countries deemed safe enough to allow its residents to enter the EU does not include the United Kingdom, Russia, Brazil or the United States, where the daily death rate from coronavirus exceeds 1,000 for the first time since June 10. In Latin America

Canada Australia, New Zealand  China and Rwanda are on the invitation list, In Latin America, only Uruguay got the green light.

The United States is the country hardest hit by the pandemic, with more than 128,000 deaths from some 2.63 million infections, followed by Brazil (more than 59,000 deaths from more than 1.40 million cases). Over  half a million people  have died worldwide

The EU hopes that relaxing restrictions will give some oxygen to tourism, a sector that has been strangled by the ban on non-essential travel since mid-March.

On Wednesday, July 1, hoteliers and restaurateurs saw the return of the first tourists, especially on the islands of Greece, a country that recorded 200 deaths from coronavirus, but whose economy was severely resented by confinement measures.

Romanian Cojan Dragos was "the first tourist" in a Corfu hotel. "We have the entire hotel to ourselves," he told AFP. "It it is sad," he said, but g he hopes to see the arrival of other visitors.

Spain and Portugal reopened their land border, closed since March 16, when the Portuguese country decided to protect itself from the pandemic that was rampant in its neighbor. Portugal is one of the least affected countries in Europe by the pandemic and Spain one of the hardest hit.

You are correct Captain. They will be updating the list every two weeks. There is a long list of exceptions though if you really want to go there. Personally I have no desire to go to Europe anyway. I can not imagine wearing a mask that long on an airplane. Nothing over there I want to see. Their queer way of life is not for me.

This is incorrect. The UK is not excluded. In any case it remains part of EU until December 31 2020.

Your article is 3 years old and is mainly focused on one small area in Paris... how many no go areas are there in the US, countless. So no one should visit the entire US because of the US cities ghettos? Every comment you make is stupid, educate yourself.

"New" did you read the article? Americans can't go to Europe so Florida is a great alternative. And yes there are many Muslim no go zones throughout Europe. https://nationalpost.com/opinion/europes-no-go-zones-inside-the-lawless-ghettos-that-breed-and-harbour-terrorists

Jbbrown you cant compare Florida to Europe, isn't thr point of a vacation to see something different? No go areas in EU? Just because you say something doesnt make it true. Have you ever been anywhere in Europe? It's sad to read some of these comments, so many people seem uneducated. Florida is nice, but so are many countries in Europe...

Welcome back seabreeze. We live very close to you here in Texas. A little south of Plano. I bet you can't wait to get some more of that good BBQ. Get a hold of me and we will invite you over for a barbecue supper. I have a smoker on the front porch. Very good points cat hair. I'm going to ignore that idiot Observer. Just pretend that moron does not exist.

Welcome to Florida and Texas, world epi-centers of the virus. Their residents are banned from states that did not rush to follow the maskless one down the "drink like a Texan path"

Come to Texas for Vacation we sure want the tourist dollars and you will have a great time!

This is good news for the American hotel and tourism operators. Americans will vacation in their own country and help restart their own economy. Since cruise ships are done for I see places like Florida doing very well for mom pop tourism operations on the beach, especially the west coast and panhandle. Europe is overtun with jihadists. No go zones in many areas. Europe was overrun and conquered by the jihadists the Europeans just haven't admitted it to themselves.

So this is Newsroom Panama but let's put in the headline that US is not on the "welcome mat" list buuut neither is Panama? btw Panama isn't ever on the USA welcome list without a lengthy and expensive interview visa process, even after all the times USA saved Panama they say nah. Also it's an honor to not be invited to the borderless EU these days