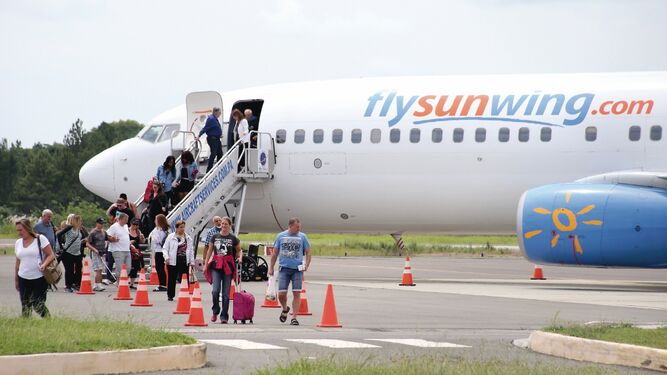 The image of Panama as a winter refuge for thousands of Canadians who arrive each year. many on package-tour charter flights has been tarnished by a $6 million lawsuit filed against the Decameron Hotel Resort over the alleged rape of two  Canadian girls by employees of the hotel, in Cocle.

La Prensa reports that that the Wingrove family arrived in Panama on March 1, 2018, for an eight-day stay at the resort. They were accompanied by a friend of their daughter. Both girls were 18

On the night of March 5, , both young people, after having consumed alcoholic beverages, headed for the hotel disco. Just before  11 o’clock.

On their way, they met a man wearing dark pants and a white shirt with the hotel logo. He was a security employee who seeing their intoxication offered to accompany them. “And this is where the story takes a turn and the versions of the events s depend on who interprets them,” says La Prensa.

Both young people and the security employee deviated from the road to the disco and ended up in one of the areas not covered by security cameras. “There, according to both young women, they were raped by the hotel employee, the former employee says it was a consensual act. The young women, who were intoxicated didn't speak a word of Spanish.

“A second security employee called by the first arrived at the scene, after the and when one of the girls returned to look for her shoes he also sexually abused the girl, in the presence of his workmate meaning one of the girls would have been raped twice.

After a visit to a health center both young people had expert and gynecological tests in search of evidence to back their version of events. Both showed lacerations in their genitals with little bleeding and one of them had semen and sperm remains on her clothes.

As a result of the tests, and l psychological and psychiatric examinations in  Canada, they decided to file criminal complaints against both security employees and a $6 million civil claim against the hotel.

No impunity
In July 2018, 3 months after the events, the Decameron hotel sent a note to the travel agency hired by the Wingrove, apologizing for what happened. “We wish to express our deepest regret over the whole situation Mrs. Wingrove has suffered from her family and her daughter's friend ... taking into account that sadly two members of our company were involved (...) those two members are no longer part of this company due to the fact that w e in no way support this type of misconduct, ” said the note signed by Juan González, the hotel's resident manager. that situation are clarified and investigations are fulfilled because this kind of news affects the image of Panama. A positive message should be sent that there is no impunity in such cases.”

On December 13, 2018, a criminal complaint was filed against Humberto Mora and Jesús Bethancourt, who by then were  former employees of Decameron

T
Meanwhile, in Panama, more than a year after the events, the alleged aggressors were arrested on  Saturday, August 3. and appeared before the accusatory criminal  court and , were benefited by the guarantee judge Ariadne Mora Lorenzo with precautionary measures of periodic notification before the competent authority and the prohibition of changing of address.

Prosecutor  Johany De León, said he would appeal the judge's decision and request provisional detention of those involved.

J.Simpson wow you sound like a bag of joy and just a wonderful happy individual. You are the definition of a Cruise Ship traveler and you should stay in your box and never leave it. Panama is a beautiful country and safe. I started laughing when you bring up Baltimore because if you think Panama is more dangerous than Baltimore or any other city in the US you are a fool. To me it sounds like you live off negativity and that is clearly why you only see and hear the bad in Panama. Funny part is no one is making you stay here so why don't you just leave and take your negativity and BS with you.

I am also someone who has been sent here for work and think the hype on the internet and media is way overrated. I live in the city and it is so congested with traffic and filled with garbage. Costa Rica and Peru are way better. People are nicer, service is better and foos is cooked better as well. People here are abrasive and impatient and the country is overall ugly compared to the photos u see online

My husband does insurance claims work for the shipping industry so unfortunately we are stuck here for the foreseeable future until his reassignment request comes through. I used to travel with him into the interior of the country when we first arrived but the unsightly conditions of filth and trash everywhere soon broke me of that. There are rats on the streets here during the day, piles of garbage that never seem to get picked up and flies OMG there are flies on everything even when you go out to eat. I was told by a neighbors son who works as a cook that the flies are all ver in the kitchens and your plate of food before it is even served to you. Normal for here and I was told to accept it but sorry I just can't. The smell of the bay here is just awful when the wind shifts, so much raw sewage flowing into it. We have friends who live in Cocle province and their house has been robbed 3 times in two years. They installed an alarm and got a dog but it didn't help still got robbed. One of them now stays home at all times which really is not a good way to live. They have their home for sale and have reduced it twice and are taking a loss but still no buyers, real estate market here is in the toilet for obvious reasons. My husband had his camera stolen in Puerto Armuelles while working. He also had his rental car window smashed even though there was nothing other than phone charger which was stolen. We have friends scattered throughout the country, some foreign others local but they all keep us abreast of the struggles happening where they live. A point was made about living rural being more dangerous and it's true. People who live on the beach in the interior get robbed a lot. Our friends in Uverito Beach have been robbed as well as our friends in Cocle and others in Santa Catalina. The thieves just patiently watch and wait until you leave and then they take their time to rob because they know that you won't be back soon because you live so far from anything. Don't ever buy on a beach here it's way overpriced and you will get robbed sooner or later. I am not selling anything here so trust my word, just stay away!!!

JSimpson, if it is so bad as you describe it, why are you still in Panama? Like it has been said, danger exist in every country, so use common sense, travel in pairs or groups. Panama has many beautiful places to visit, many good restaurant that are not the over priced tourist destinations and their people are cordial. Do not know what parts you visited, lived or experienced, but it's a total different experience than mine and many other that have experience Panama.

Either way coming here for something other than work makes no sense. Panama is not a good vacation destination. Take a look at trip advisor and you will see that it is replete with bad reviews of food and service. There are lot's of crimes against tourists and expats taking place in Panama, so much that the police are going to start the spot checks again. a Dutch guy murdered in colon, 2 American tourists attacked on the Cinta Costera (one stabbed) and many other incidents. Would you vacation in ghettos of Chicago or Baltimore? Then why bring your family to Panama? I agree with Yarkaki the more rural you get the more of a target you become. Not so long ago they road blocked and robbed a well know panamanian who owns an eating establishment in Cambutal. They just targeted him, blocked the road and luckily only robbed him at gun point. Rural areas of Los Santos and Chiriqui provinces are dangerous for tourists. expats that live in those areas take precautions and have plenty of true stories to tell. Just take your family on a cruise ship and forget Panama!!

J. Simpson... you got it wrong... the two Dutch Girls were not dismembered....they disappeared and later it was determined via evidence that they were eaten by wild animals. They ignored warning signs and went into an area they never should have without proper guides. You can not blame Panama .... Your use of the terms 'here' and 'Chiriqui' shows you are probably living in Panama. You should get your facts correct and instead of telling people not to come here why not advise them of the positives and what the dangers are. There are dangers in every country in the world and of course, anywhere, the further rural you are the 'worse' your odds are.

Just not worth it to come to Panama. Remember the Dutch Girls who were killed and dismembered recently in Chiriqui? Panama is a poor value for travelers and when you factor in the crime risk just don't come here. The more rural you are the worse your odds if you get hurt or something happens. There was a girl killed in Cambutal Panama a couple of years ago and it took forever to get her body moved. bystanders tried to keep the flies off of her. really sad. Just go elsewhere for a vacation!