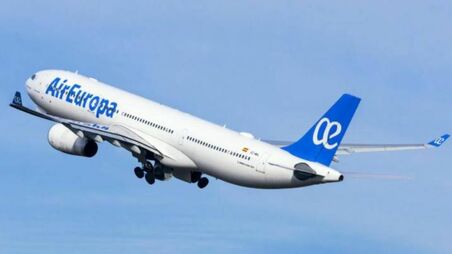 Iberia, a subsidiary of the  British-Spanish-British group IAG, reached an agreement to buy the Spanish airline Air Europa, putting   Latin America at the center of its strategy to propel Madrid to the level of the major European airports.

"Iberia has agreed to acquire all the issued share capital of Air Europa (...) for one billion euros  $l.12 billion that will be paid in cash at the close" of the operation, the International Airlines Group (IAG) announced on Monday, November 4

The agreement, to buy the company from the Spanish tourism group Globalia, still needs the approval of the competition regulators.

The deal implies that  AIG would become dominant in Spanish airports.

Born from the merger of British Airways and Iberia in 2010, the group - which includes Aer Lingus and Level - already owns the low-cost Spanish airlines Iberia Express and Vueling.

IAG expects to close the acquisition in the second half of 2020 and seeks to strengthen its links with the American continent thanks to the 24 routes available to Air Europa.

Latin America is thus at the center of a strategy that seeks to make the Madrid airport a great connection center capable of competing with the four great Europeans: Paris Charles de Gaulle, London Heathrow, Amsterdam, and Frankfurt.

"This operation is of great strategic importance for the Madrid hub that, in recent years, had lagged behind other European hubs," said Luis Gallego, CEO of Iberia.

"Following this agreement, Madrid will be able to compete with other European hubs on equal terms, with a better position on the routes from Europe to Latin America and the possibility of becoming a gateway between Asia and Latin America," he said.