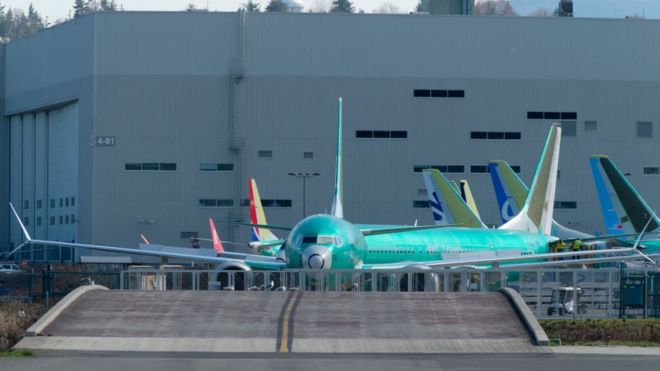 Two fatal crashes of Boeing 737 Max aircraft were partly due to the planemaker's unwillingness to share technical details, a congressional investigation has found.

It blames a "culture of concealment" at Boeing, but says the regulatory system was also "fundamentally flawed".

The US report is highly critical of both Boeing and the regulator, the Federal Aviation Administration (FAA).

"Boeing failed in its design and development of the Max, and the FAA failed in its oversight of Boeing and its certification of the aircraft," the 18-month investigation concluded.

The Boeing 737 Max has been grounded since March 2019 after two crashes, in Indonesia and Ethiopia, caused the deaths of 346 people.

The report found a series of failures in the plane's design, combined with "regulatory capture", an overly close relationship between Boeing and the federal regulator, which compromised the process of gaining safety certification.

"[The crashes] were the horrific culmination of a series of faulty technical assumptions by Boeing's engineers, a lack of transparency on the part of Boeing's management, and grossly insufficient oversight by the FAA."

"Cost-cutting… that jeopardised the safety of the flying public", a "culture of concealment" over issues with the aircraft, "troubling mismanagement misjudgements" - just a snapshot of the stinging charges against Boeing.

But the US aviation regulator, the FAA, comes off almost as representatives find it guilty of "inherent conflicts of interest" and "grossly insufficient oversight".

They say the regulator was, in effect, in Boeing's pocket and that the FAA's management "overruled" its own technical and safety experts "at the behest of Boeing".

Other investigations are outstanding, including a giant lawsuit from the relatives of those killed in the second crash in Ethiopia.

Boeing said it had made "fundamental changes" to the company as a result of the accidents.

Like people needed one more reason not to travel.