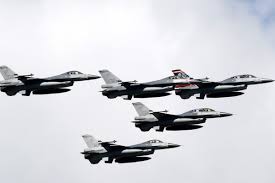 China has decided once again- as it does periodically- to up the anti with Taiwan, the big off-shore island, it claims as its own. Last month China sharply increased its military maneuvers close to Taiwan’s borders.

In return Taiwan sent its fighter planes aloft every day for two weeks. US diplomats in Taiwan are saying this is the worst escalation of Chinese military activity in two decades.

This move by China is a repeat of what it did two months ago. In mid-September Chinese jets crossed the Taiwan Strait median line seven days in a row. This is an unofficial demarcation line that both sides have respected for decades- a very useful tacit agreement that has worked to keep hostilities in check. These incursions by China drastically shorten the warning time for Taiwan’s air defenses.

What has changed that pushes President Xi Jinping to start being aggressive again? It is two things: the deteriorating relationship with the US, and President Tsai Ing-wen of Taiwan’s clear repudiation of the present-day Chinese interpretation of the so-called “1992 Consensus” that positioned Taiwan and China as being part of the same country with each side allowed its own interpretation of what China is. President Tsai says that China these days is defining consensus as “one country, two systems”- its formula for Hong Kong. Even the opposition party, the Kuomintang, traditionally more pro-China, says that a Hong Kong-style arrangement would not be supported by most Taiwanese.

Trump Provocation
For its part, the administration of Donald Trump has been increasingly provocative- sending senior government officials for the first time in decades to visit Taiwan. Recently the administration announced it was considering a $7 billion package of arms sales, breaking once again the US’s own understanding with Beijing not to ship modern arms.

Taiwan is caught in a bind. If it reacts China will fly even more sorties. If it doesn’t it allows China to undermine Taiwan’s sovereignty. So far President Tsai has decided to stay cool. Taiwanese experts point out that even now China has not yet practiced an amphibious exercise using more than 1000 people which is far short of the 80,000 it would need to mount an invasion. Dennis Blair, the former commander of the US Pacific fleet, told the Financial Times recently that “it would be a fool of a military leader who would say he has confidence that when he gathers the 80,000 they would be able not to keep out of each other’s way, shoot each other, fall off schedule and have a complete debacle which would make the operation fail”.

China is putting the clamps on Hong Kong, worried that the pro-democracy demonstrators, particularly the part that calls for independence, has grown too strong. This is in clear breach of the agreement it made with the British before it handed over Hong Kong to the mainland. Many worry that the clampdown in Hong Kong is a prelude to what it might do with Taiwan.

But it wouldn’t be so easy as dealing with Hong Kong. Taiwan has formidable air defenses with modern American-supplied equipment, some of which is so sophisticated it can only be used by US military personnel. (If US military personnel were killed in an attack on Taiwan the US would find that a very serious affront.)

Unlike Hong Kong, where the politics is tightly controlled, Taiwan has had a fully functioning democracy since 1996. Even the opposition Kuomitang party, which leans towards China, does not want to get too intimate with Beijing. Increased trade, tourism and daily flights are what it has fought for when its party has been in power. It does not approve of Chinese sabre rattling.

In broad terms it might seem that the politics of Taiwan is the policy of keeping to the status quo- neither independence nor union. Indeed this is so. But it is not the same status quo as 20 years ago - Taiwan is both more independent (not independence) minded and more conciliatory. It is China that has breathed fire onto the coals.

It is a great moral and political wrong that Taiwan is excluded from the UN, from where it was summarily rejected when President Richard Nixon made his historic peace with Mao Zedong. Nevertheless, Taiwan has carved out a great deal of economic and even political space for itself. It has become, despite a population less than half the size of Britain's, an industrial and technological giant with over $330 billion of foreign exports each year. Its investments of capital, machinery and personnel in China largely made possible China's own technological revolution. Foxconn, the $178bn Taiwanese company which makes the iPhone and just about every other tech gadget, has a workforce of close to 1million  in China.

Taiwan has a fine national health service, only second in the world to Sweden's, according to the Economist Intelligence Unit. Compare that with China’s that treats the health of its masses of poor abominably.

Politically it becomes more mature by the year. Its democracy appears to have put down deeper roots than many much older ones.

The human rights abuses prevalent under the dictatorship of Chiang Kai-shek and his son are history (Chiang and his army fled the mainland and settled in Taiwan when the Nationalists were defeated by the Communist army.) The press is sophisticated and the NGO sector thrives. Justice is honest, if at times erratic.

China surely knows it could never swallow mighty, if small, Taiwan. And it knows that the US with its offshore submarines and F-15s based in nearby Okinawa would never let it try.

If one day China does move towards democracy it could be that the Taiwanese will be less fearful about a closer relationship, although I doubt if they would ever give up their de facto independence. They might accept a European Union-type relationship. The Chinese, for their part, should think hard about their historical claim to Taiwan. It is a tenuous one and I believe would not pass muster in the International Court of Justice to which Taiwan should take China if it goes on bullying it.

There is one important way that would help cool the worsening relationship between China and the USA. It is for Trump to cancel his plan for more arms for Taiwan. The idea that the US maintains arms sales to an island off the coast of a nuclear-armed rising power is absurd. There never can be mutual deterrence. The arms are symbolic but profoundly irritating to Beijing.

Taiwan does exceedingly well on its own. Its democracy flourishes. It is a self-confident country. It is striding towards freedom. No military activity from China can change this. Taiwan does not need more arms.

For the present the status quo is the best policy for Taiwan and should be for China and the US too. Can Trump and Xi see that? Obviously not. Maybe a President Joe Biden can.

As usual, Powers is a damn fool. Passivity in the face of agression? Yeah. Let me know how that works out.

It's hard to believe anything coming from a homophobic idiot like you. Thought you were in texass getting rid of all the homos there. Why are you posting here? People where you are getting tired of you?

Its hard to believe anything that comes from this left-wing, pro homo website.