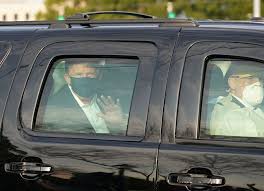 AP- WASHINGTON  Ovt.5- One wants to raise taxes, the other to lower them. One will seek to deepen the economic war with China, the other to ease tensions. But neither of them will achieve much without the support of the United States (US) Congress.

The economic policy proposals of President Donald Trump and his Democratic challenger Joe Biden offer dissimilar views on the world's largest economy ahead of the November 3 election.

Biden's agenda targets the poorest Americans and includes a number of measures that would imply an abrupt change from Trump's administration, with a return to the policies of Barack Obama, of whom he was vice president.

Trump, by contrast, offers what analysts lament as few details of his economic platform, save for his promise to restore a comparatively good economy and the employment record that Americans enjoyed until March, before the US pandemic. new coronavirus will end it all.

"I would say that the Biden plan is really an expansion of existing social programs," said John Ricco, senior analyst for the Penn Wharton Budget Model at the University of Pennsylvania.

"In contrast, the Trump plan, to the extent that such a plan exists, ... addresses the same themes the administration has pursued for the past four years.

How much each will achieve what they want will depend on who controls Congress, currently divided between a Senate in the hands of Republicans and a House of Representatives dominated by Democrats.

Polls show an advantage for Biden and several Democratic Senate hopefuls, so analysts are leaning, albeit cautiously, for an eventual victory for Biden and a majority of his party in the upper house.

"Democratic control of the Lower House, Senate, and White House would produce one of the biggest policy changes, but if Republicans keep the White House or Senate, we expect little new federal, fiscal, or other policies," he said. JP Morgan on a note.

Biden's economic platform is centered around the motto "rebuild better," promising to create jobs through infrastructure improvements and clean energy funded by $ 4.1 trillion in taxes on big business and the wealthy over the next decade.

Trump, meanwhile, promises to restore "the largest economy in history", as he describes the performance from the beginning of his term in 2017 until last March. After a decade of economic expansion, unemployment reached its lowest rate in 50 years.

Polls show voters are leaning toward Biden as the country battles the pandemic. But last Friday the campaign suffered a turnaround when Trump announced that he had been infected with Covid-19.

The platforms of both applicants appear to benefit different sectors, said Mark Zandi and Bernard Yaros, economists at Moody's Analytics.

Biden's proposal targets the poor and the middle class, whose “tax burden will remain roughly the same as it is today, but will be major beneficiaries of increased public spending on education, health care, housing, and a plethora of other social programs. Zandi and Yaros wrote.

A new Trump presidency, meanwhile, would likely increase the tax cuts approved by Congress in 2017 and benefit "greatly higher-income households and businesses, while government spending will be reduced on healthcare and a variety of social programs ”, they added.

If Democrats gain control of the White House and Congress, Moody's predicts that full employment from before the pandemic could return in the second quarter of 2022. And if Republicans gain that control, it would only come early in the early 2000s. 2024.

But Moody's estimates that neither Trump nor Biden will most likely gain control of both powers, so full employment would return in 2023.

Meanwhile, the companies evaluate the different commercial approaches of both candidates and, in particular, the position towards China, a country with which Trump initiated a trade war.

More than 3,400 companies from all sectors, including heavyweights like Tesla, Mercedes-Benz, Home Depot and Ralph Lauren, sued the Trump administration over tariffs on Chinese exports to the United States.

Biden could reverse that policy, but Ricco points out that only up to a point. "Both candidates envision a landscape with much more skepticism towards free trade," he said, although "the tools to get there are different."

If not for a few sane, intelligent and wide-awake folks like Stick, Wenny, Ajd and respectful, the comments section would read like an amen corner of Alex Jones or a Qanon site! And you guys are generous calling them low information voters, they are downright stoopid. The death-cult folks who vote against their own interests are hard to follow, and harder to believe they are occupying space in our little tropical country. Please, all you trumpistas just leave! We did fine without you and will do much better when you take your sorry selves back to whatever sh#thole states you came from. Just so you know, Dear Leader is not out of the woods yet. He is busy tweeting like its March 2020 all over again. I cannot wish him ill will because that is groveling down to his scumbag level..but some people say he could crash at any time.. just saying..

Predictably, JbB worries about Preisdent Biden jacking up the national debt. Yet Trump jacked it up more this year than ever before, and his minions didn't protest. In fact, most Republicans voted for the stimulus bills. When Biden takes office, all the Repubs will become born again deficit hawkd, expoding their hypocrisy for all to see.

The biggest joke is jbb talking about "low information voters"!! Magas are the quintessential "liv"s. Fools who constantly vote against their own interests. Under humpty, social security and meaningful healthcare will disappear....something he has never hidden as his intentions. Yet his base, primarily comprised of old obese uneducated diseffected white people continue to scream their support for the orange dotard. The recent video of the liar in chief on his joyride outside the hospital saw a maga screaming " I would die for that man"!! Little did the ignorant fool know that he will likely do just that. The orange dotard shows daily that he cares nothing about anyone but himself. He increases income inequality daily with his policies and still those fools who believe his lies and suffer most from his policies convince themselves that what is obvious is not actually happening. The right wing nutjobs always talk about the liberals and TDS....trump derangement syndrome. Well the magas suffer from something far far worse....JJS...jim jones syndrome. They have whole-heartedly and gleefully drunk the orange koolaid that is killing them daily. That ridiculous and dangerous jim jones spectacle yesterday by the orange dotard was reminicent of his lover, kim jong un or putin. He is infecting more and more people daily, all to promote the continued insanity he calls his campaign. The election cannot come fast enough, so that the culmination of his diabolicl plan can be realized. He will take down the entire country when he loses. Ptepare for the chaos to come. In addition the virus will increase and the country will tumble into a disaster like never before seen. All because the great america could not understand its own weaknesses.....greed and avarice and ignorance has been the downfall of many dynasties...america is no difference. Especially when the country's entire existence is predicated on the glaring issues of slavery and the inherent white fear and guilt borne out of that unaddressed curse on humankind.

Goldman Sachs thinks a blue wave of Democrats — meaning full control of government via the presidency (Joe Biden), Senate and House — come November could be good for the U.S. economy. “All else equal, such a blue wave would likely prompt us to upgrade our forecasts. The reason is that it would sharply raise the probability of a fiscal stimulus package of at least $2 trillion shortly after the presidential inauguration on January 20, followed by longer-term spending increases on infrastructure, climate, health care and education that would at least match the likely longer-term tax increases on corporations and upper-income earners,” wrote Goldman Sachs economist Jan Hatzius in a new note to clients on Monday.

All you trumptards are really easy to con because a 3rd rate flim-flam man has you thinking he is something special. Fake, fraud, can't fire anyone face to face, draft dodger. He tells everyone to not let the virus control their lives after receiving care that only he can get. If everyone had that level of care we would be in a totally different place now. This guy belongs on tv. That's the only thing he's good at.

Trump has deep support inspite of CNN and others making him out to be inhuman. This whole covid sickness has really shown the caring human side of Trump.

Trump just blows my mind. Watching CNN they had him dead by today and I just saw the guy walk out of the hospital stronger than ever. Trump has my vote, surely God is watching over him for a good reason.

Well Treetopflyer, you have attempted one of the oldest tricks in the book by running a whole bunch of useless claims of success that require not only fact-checking, but actually turned out to be of no benefit to the intended audience. Something as simple as "rob-calls", you can't tell me that his signing this bill did not put rob-calls out of business. If you live in the US, you still receive unwanted robot-calls. You see how that needed explaining out? You attempt to dismiss the ignorance coming out of his mouth as "mis-spoke", when it fact it is sheer disregard and disrespect for everyone that aint kissing his ass. Nothing he has ever attempted to do will never overshadow how he sat back for 2 months and allowed this virus to take hold and kill almost 250,000 Americans.

How does the USA fix the deficit? You raise the taxes on people making more than $400.000 a year, (Which Biden recommends where Trump gave 2-trillion in tax cuts to the upper 10%), You improve the economy and pay people $15 an hour. ( you improve the economy by fixing the Corona Virus First), The you cut wasteful government spending. The US defense budget is 54% of all money spent. I do not recommend this but if they cut this budget in half we would still be spending more than the next country.

Excellent comments by all! Trump in true Alpha male form recovers from the kung flu in record time. I see that pussy Cam Newton NFL player still isn't back on the job. Trump is old school Alpha.

Very true JB. They highlight creating jobs, but what kind of jobs. 100,000 McDonalds jobs is not beneficial to anyone. We need good jobs with benefits and good pay. The democratic way of producing jobs has always been a complete failure. They hire more government employees to create more bureaucracy.

A Biden presidency will hasten the collapse of an already over leveraged dollar. His new green deal boondoggle will spend a hundred trillion dollars that will basically enrich his fellow cronies and surely his coke head son Hunter. Trump will also spend but he wants to spend on infrastructure that is sorely needed and will stimulate the broad economy and jobs. President Trump will also hold Chicom's feet to the fire and milk a couple of trillion out of them starting with cancelling the bonds that they hold. If sleepy joe wins it's time to hide wealth and structure income to avoid the coming tax storm. Companies should have a plan in place to move their company out of the USA if Biden wins and other companies should be looking at how many people they need to lay off to pay the Biden tax increases and not hurt the bottom line. Trump understand business and job creation. Sleepy joe understands government and how to steal from the producers in society. The choice is very clear but the low information voters don't understand it, but they will learn the hard way if sleepy joe wins.......High Unemployment!!