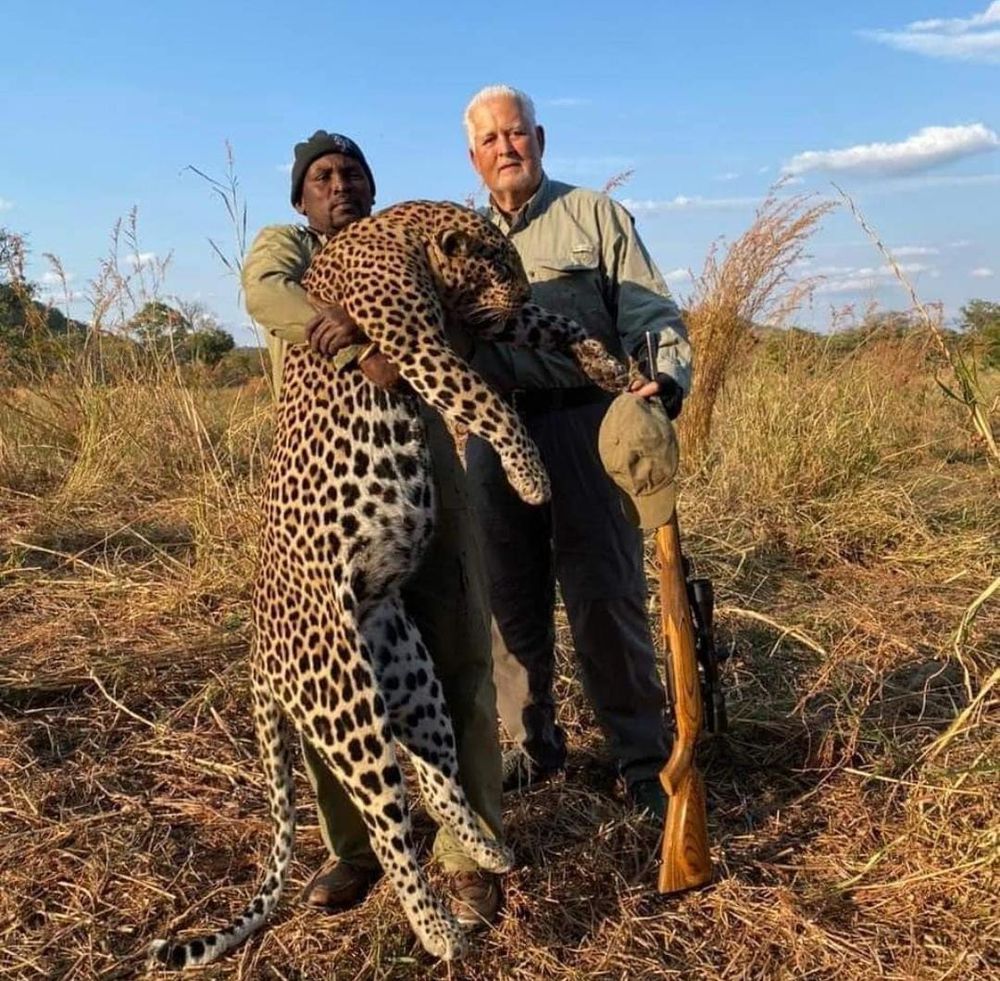 The photo of the inert body of a leopard, just hunted with a rifle equipped with a telescopic sight, next to which former president Ernesto Pérez Balladares poses, has caused an angry response from those who have commented on the post, according to the former president, who uploaded the photograph showing the macabre spectacle.

Pérez Balladares answered the matter with arguments - as idiotic as the size of his ego - that have been easily destroyed by netizens, who have not spared the offenses against the author of the no less offensive death of the feline.

“To those who have expressed so much hatred: I hope they do not accept fishing or eat animal products. Eat hatred, envy and resentment, "says his tweet, by way of explanation, which said," I do not owe anyone, "although, anyway, he gave it. Perhaps the envy thing is because killing a leopard costs between $ 15,000 and $ 30,000; and if the hunt included an elephant, it would be necessary to add between $ 23,000 and $ 60,000. I suppose that so much money destined to kill animals, whose population is decimated because of legal and illegal hunting, is for him a cause for envy.

In the comments that I have read in response to the explanation that, according to this man, he does not owe anyone, it must be said that there was resentment and even hatred, but not for his reasons. It was not because he has the money to pay for these eccentricities, but because of the fact of having killed the leopard, which, surely, will have undergone a taxidermy process that will allow him to show his head as a trophy in his hunting room, where there are several other heads of wild animals, killed in their periodic "hunts."

In April 2010, relatives of the former president said that he had paid $ 45,000 to participate in something that hunters call a "big five " in Africa, which is nothing more than hunting a lion, a leopard, a rhinoceros, an elephant and a buffalo. He probably did not participate in the safari for legal reasons, but we see that he has returned to being the riflescope hunter that he likes to be.

And before you tell me that I am writing this because I am also envious of you, I will go ahead by answering you that, like many of those who answered you, such a statement —if you do so— is not true. I have nothing to envy him, because nothing he has or is provokes me. I have no love for someone else's money; I don't like narcissism or arrogance either. If, in addition to this, I had something else to offer as a human being, perhaps I would be envious of the good.

On the other hand, I believe that the envy is part of his being. I have a sister with several master's degrees and I have never heard her claim the title of doctor. And I agree with one of the people who responded to him in networks, that surely, due to the fact that he would no longer run for public office, he is now showing us his other side —and true—, in which case, yes The title of doctor comes in handy, that of Doctor Merengue.- Rolando Rodríguez B. Spicy Saturday.LA PRENSA

PANDEMIC – No room for charlatanism
9
PEGASUS – A Deadly ‘Toy’
0
Young people flocking to get Covid vaccine
13
Suppressing  police records is a no no
0
OPINION: When Panama justice made a fool of itself
0
Resisting vaccines endangers all
24

My ex was a big game hunter and went on several safari. We had an extensive trophy room in our up state home. Everyone was amazed at how extensive our trophy room was. I think that even helped us ink a few deals with some Japanese clients back in the 90's. I hope these animals are managed properly to provide these hunts to many future generations.

Only one response here is worth a damn. The rest are part of the tiny dick big gun gringoide sickness. The POS ex-prez was a zero minus one on the national stage and probably funded his massacre on the backs of Panamanian taxpayers. Humans that unfairly murder exotic animals are simply the worst of the human condition. Sick shit.

There are very few big game tags sold every year in Africa. In many cases there could actually be a lottery to see who will have the opportunity to purchase the limited hunt. The ignorance of the snowflake liberal writing this article epitomizes just how uneducated the university graduates are today. These same types of uneducated fools refuse to do forest management and control burns in western states of the USA. When California erupts into a fireball due to these poor practices do they accept blame? No they scream global warming because that is what they have been taught to parrot. If you point out their failures the they will scream and parrot racist, racist. I say congratulations to the doctor on a successful hunt of a lifetime.

That would make a lovely rug.

Those animals are managed and controlled hunts are ok. Poachers are totally different. If the countries can't control poaching then that's on them. The good Doctor bought legal tags and went on a legal hunt. Typical leftist manuever to try and conflate legal and illegal activities. Sorry we caught you this time.

As one who has lived and traveled widely in Africa the only shooting I did was with a camera. The argument that hunting helps the economy is self-defeating. What happens when all the animals are wiped out? Do we get an invitation to view El Toro's gallery? I once talked with a game warden in Zambia who mused about mounting the heads of illegal poachers who had crossed his sights. If you enjoy hunting. try the Taliban in Afghanistan although they tend to shoot back.

By killing that apex predator the prez saved the lives of thousands of other animals that it would have been killed. It's nice to see proper game management practices are still being employed.

Let's not forget the expense of taxidermy. On an animal this exquisite it will run into the thousands. The cost of transporting it back to Panama won't be cheap either. For those complaining about a hunt on the other side of the planet maybe you should focus a lityle closer to home where the locals eat the sea turtles and their eggs bringing the population near extinction.

Bagging an adult leopard is no easy feat. The are mostly nocturnal and hide during the day. They also have hearing and eye sight among the best in the world. It seems the Doctor is quite an accomplished hunter. These hunts are outrageously expensive but that money really helps the poor economies of these 4th world countries. Once Covid subsides I hope that I can plan a hunt with some UK friends. The excitement of an African hunt is the trip of a lifetime.

Wow he really bagged a nice one! Myself like millions of others have always wanted to go on Safari but unforunately it's not in the card. Congrats to the good Dr. And his guide on a successful hunt.