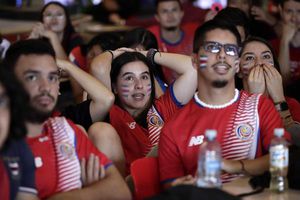 GOVERNMENT workers were given time off to watch the game.

Costa Rica without a soul and little football disappointed local fans by falling 7-0 against Spain in its debut at the 2022 World Cup in Qatar the worst defeat in the team's history in world cups.

”It was a very complicated match, we never woke up, Costa Rica's game was very slow and with the pain in my heart as a Tico, unfortunately it was not enough and there was a great lack of love, passion. Today was not the Costa Rica that we expected”, the ex-soccer player and World Cup player in South Korea and Japan 2022, William Sunsing, told EFE.

The former striker lamented that "we never saw anyone get the slightest desire to show that we were alive" and that "the saddest thing was to see a Costa Rican team without a soul."

The 7-0 conceded on Wednesday, November 23, 2022 is the worst defeat for Costa Rica in six World Cups in which it has participated and now the team must recover to face Japan next Sunday and Germany on December 1. Japan became the second giant killers of the World Cup on Wednesday with a 2 -1 defeat of Germany.

"Is not easy. There are two games left, but if 'la sele' continues like this, we will go for a walk without changes, ”he said.

Sunsing said that this Wednesday's loss is "a very strong physical and mental blow" and that the recovery time is very short. ".

The bars and restaurants of San José were packed, even though the game started at 10:00 a.m. local time, unusual hours for soccer games, and much more on weekdays.

Most bars had to adapt and sell coffee and breakfast to customers.

The disappointed face of the fans was evident while Spain filled Costa Rica with goals, whose coach, the Colombian, Luis Fernando Suárez, and the footballers, in the previous days had told the media that they had the right to dream of being champions of the world.