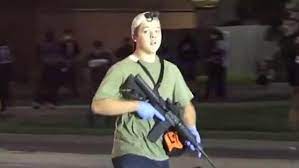 NEWSER - In an interview that aired Tuesday evening on Fox News, former President Trump announced he'd recently met at Mar-a-Lago with the 18-year-old Wisconsin man, who was acquitted last week of fatally shooting two people and injuring a third during Kenosha protests in August 2020. "He called," Trump told Hannity, noting that Rittenhouse's mother accompanied the teen to Trump's estate in Palm Beach, Fla., per CNN. "He wanted to know if he could come over, say hello because he was a fan."

During the program, Hannity displayed a photo of the meeting between the two, which also showed Rittenhouse's mother. A closer picture of just Trump and Rittenhouse, both grinning in front of a photo showing Trump meeting North Korea's Kim Jong Un, was also posted online. "That was prosecutorial misconduct," Trump noted to Hannity of Rittenhouse's trial. "He should have not have had to suffer through a trial for that. He was going to be dead." Trump also called the teen "really a nice young man."

Trump offered congratulations to him in a statement, noting, "It's called being found not guilty—and by the way, if that's not self-defense, nothing is!"

President Biden, meanwhile, had a contrasting view, acknowledging that the jury's word was final but conceding that many Americans, including himself, would be left feeling "angry and concerned" at the decision.