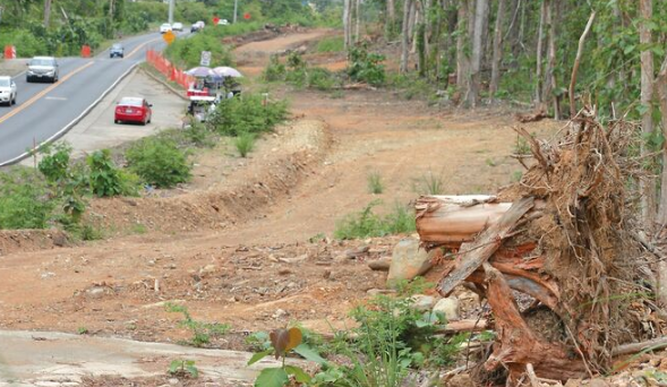 Panama’s   Ministry of Public Works (MOP) and the Italian construction company Astaldi are digging in for what could be a protracted battle as they accuse each other of the delay in completing the $89.1 million.four-lane extension of the Omar Torrijos highway

As environmentalists and concern view the uncompleted work and hectares od forest devastation The tone of the communications between the MOP and Astaldi is heating up and on May 3 the MOP notified the company of the start of the administrative resolution process to quash the contract.

The Government accused the constructor of several breaches, especially in the environmental management, the delivery of the design, as well as the quantity and capacity of the resources assigned to the work reports La Prensa.

With 80% of the execution period already elapsed, only  10% of the work has been completed something that  the MOP deems  "unacceptable" and represents the non-compliance of the entire program.

The contractor, for his part, responded on May 17 and accused the MOP of delaying the procedures for the approval of the accounts, to the point of not having received any disbursement during the entire duration of a contract, whose order to proceed was received in 2018.

Astaldi refers to delays in the responses by the MOP and changes requested to the project. "The delay in payments and the poor administration of the contract by the MOP, along with the delay and zigzagging decision making, have significantly affected the execution of the project," says the construction company in a letter,  that asks the MOP not to cancel the contract.
mop environment astaldi
Share
Previous Post
Elected representatives board the $4 million gravy train
Next Post
Mayor in center of expenses scandal