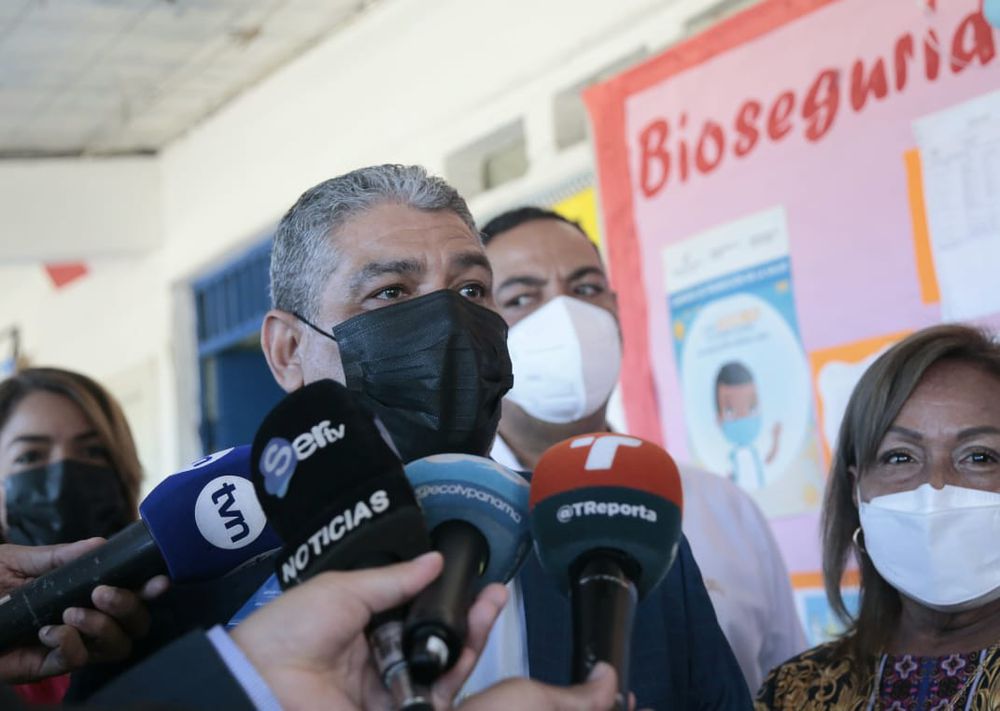 The timetable for the gradual reopening on Thursday will be announced on Tuesday says Health Minister Luis Francisco Sucre.

Sucre also announced that the control of mobility schedules by ID has been eliminated; it will only be by gender.

Minister of Commerce and Industries, Ramón Martínez, said that as of February 1, the retail trade will be able to operate in person, keeping the corresponding limits on numbers.

"Quarantine is when you restrict the movement of a sick person. Tyranny is when you restrict the movement of a healthy person." Taiwan and most of Asia did not restrict healthy people. One more thing that Taiwan had was an advanced tracking system set up after SARS that is strictly in place for control of disease with very strong restrictions outside of an emergency. They actually obey their own rules of its use. How many governments would be that honest, so that also helped them. PLUS early on Taiwan (Dec 2020) sent in doctors and scientists to Wuhan as WHO was lying to the world with China that this was not being transmitted human to human and China was doing such a great job controlling it etc, remember all the lies by them? Later we found out the WHO and China were fraudulent in their false disclosures to the world and even worse allowed the spread globally across the world while simultaneously locking down Wuhan to prevent spread in mainland china. This was an act of war. Days later Taiwan team came back and reported WHO and China were lying and deceiving the world. Taiwan immediately stopped all airline traffic from Wuhan, MONTHS before any other country. Taiwan then attempted to broadcast their findings to the world along with their successful treatment protocol but were suppressed by the WHO, China and Big Tech. Taiwan won and the world lost because of the criminals behind this orchestrated genocide with globally complicit actors. The more you learn, the more outraged you will become. If Taiwan was not suppressed, including BARRING THEM FROM SPEAKING AT "WHO MEETINGS," this would never have been the plandemic these criminals created. It would have been another coronvirus flu. These people behind this globally plandemic are terrorists. Everything about everything that has happened is terrorism and society will make them pay for their crimes against humanity. The people behind this are truly evil, at such a level that most people struggle to even understand and grasp what is happening before their eyes. I believe in humanity, they are slow but once woken up it will be a giant against these criminals.

I get paid over $87 per hour working from home with 2 kids at home. I never thought I'd be able to do it but my best friend earns over 10k a month doing this and she convinced me to try. The potential with this is endless .Join On This website.....http://www.bizsalary.cf

Casual Observer some early quarantine was used correct. But those that were infected were early treatment to prevent and suppress cytokine storm. The did NOT follow WHO or China death protocol. Instead they prevented cytokine storm as I explained. Masks evidence is rampant now they are making people across the world extremely sick. Is Required Mask Wearing Medically or Scientifically Justified? https://ahrp.org/are-required-mask-wearing-medically-or-scientifically-justified/ The science shows mask wearing does not work and in fact is leading to more death from their widely adopted use. https://www.bitchute.com/video/WF3A1rcw4vJ7/ THE LIVE MASK TEST SHOCKS VIEWERS

Benjaxed, I would ask you “how did you arrive at this conclusion” except you didn’t give any opinion other than you appreciate Newsroompanama. It would be nice that instead of putting someone down, you offered up an opinion now and then. In so doing, an intelligent debate can take place; unless you have nothing of intelligence to contribute.

"two" was used on purpose before the brain dead peanut gallery add their useless two cents...LOL...LOL. HERE IS A TEST FOR COVIDIDIOTS! https://www.worldometers.info/coronavirus/country/taiwan/ Taiwan has 24 million population only 7 deaths after 12 months, why so few deaths? It is because they did not follow the China or WHO murder death protocol of ventilating people at 200% normal levels (which kills most people) instead used early treatment steroids to prevent cytokinin storm deaths saving majority of their citizens lives. The world followed genocidal China/WHO death protocol! Compare your country against Taiwan’s, which got it correct?

Insane individual like banjaxed and other covidIDIOTS are two stupid to even accept reality when presented. Really come across all of them as complete idiots who deny science. CDC ADMITS AT LEAST 96 PERCENT OF COVID DEATHS WERE COUNTED WRONG [2021-01-12] - OAN (VIDEO) https://www.bitchute.com/video/M4FlWbyuRoX6/

Thank you Newsroom Panama. Please keep up the good work. You have one of the most entertaining comments section. I thought that with Trump being defeated in the elections that my daily dose of humor would dry up but it looks like it will continue for some time to come.

MHogan speaks the truth. Great Facts! I could not even imagine being a child during this time and the damage being done all based on lies and fraud. So sad all of this harm being done by liars and criminals, after 1 year 99.9% of the planet is living without any treatment and we know 97% of PCR cases reported to terrorize people every day are fraud done with so many cycles that only 3% are accurate per EU court records. Here is exactly what MHogan is talking about. ***More youth are dying of suicide, overdose than COVID-19 during pandemic: CDC director https://www.christianpost.com/news/more-youth-are-dying-of-suicide-overdose-than-covid-19-during-pandemic-cdc-director.html

This is coming to an end, the world is waking up!! We will win and many will go down!

Stress of Covid restrictions — lockdowns, business closings, loss of jobs, denying social interactions — impacts Covid outcomes in at least 4 apparent ways: 1/ Greatest severity of COVID-19 infections is observed in alcohol imbibers and surveys show participants who experienced COVID-19-related stress consume 4.7 times more alcohol. Dramatic worldwide increases in alcohol consumption were reported over the first six months of the COVID-19 pandemic. One large study of 188,653 adults who tested positive for COVID-19 were 668% more likely to over-consume alcohol. COVID-19 is a stress/ anxiety/ fear/ alcohol epidemic, not a viral epidemic. 2/ Obesity + alcohol = death: Obesity is said to be a primary risk factor for COVID-19 associated death. However, in a study 12,937 people (4,496 were never-drinkers and 8,441 were frequent drinkers), heavy drinkers who were obese were twice as likely to die and have a positive COVID-19 test, but no increased mortality among those individuals who were not obese. Combined obesity and heavy drinking increases mortality. Stress and inability to get out of the home results in turning to comfort foods —usually high carbs and other unhealthy choices that contribute to weight gains and obesity. 3/ insomnia — lack of adequate, quality sleep lowers the body immunity. With sleepless nights and the growing problem of insomnia, consumption of caffeinated coffee and tea to overcome daytime sleepiness also rise. The problem is so prevalent they are calling it coronasomnia. 4/ mental illness is not only increased in adults, stressed over fear of infection and providing for their families but children are not considered as part of the victimology—child psychologists are seeing a major uptick in mental illness in young children. The impact of isolation from their peers, of not being able to read emotions when a mask covers half the face, avoidance of close familial contact so necessary for children who cannot understand fully why. Suicides are also on the rise in all age groups. >> These outcomes are commonsense yet somehow the health authorities have seemingly maintained a myopic overview and contribute to the health problems as an unintended consequence of their policies.

Brian, you are absolutely correct. The cure is far worse than the disease. These people are corrupt and destroying what little is left of the Panama I used to like. Panama is a 3rd world kiss-ass government more worried about plastic straws than the pot-holes and dog shit that cover the streets.

Lockdowns kill 10 times more people than the virus itself and destroy business and jobs, any political leader imposing them or police that enforce them are guilty of crimes against humanity. There is NO science that supports them as effective and they have not worked in one country. "Quarantine is when you restrict the movement of a sick person. Tyranny is when you restrict the movement of a healthy person." The illegal edicts, rules and laws against Natural Law must end! https://www.bitchute.com/video/xvAuI5juiEGU/ THE LOCKDOWN WILL KILL 10 TIMES MORE PEOPLE THAN THE VIRUS ITSELF https://www.bitchute.com/video/XWzGihqwtVbx/ DR. MICHAEL YEADON UNLOCKED: WHY LOCKDOWN WAS A MISTAKE MORE THAN 60% HAVE IMMUNITY ALREADY https://nypost.com/2020/10/11/who-warns-against-covid-19-lockdowns-due-to-economic-damage/ WHO warns against lockdowns due to economic damage done by them. https://www.bitchute.com/video/jyViO2BsRijN/ WHO - DR. DAVID NABARRO: APPEAL TO WORLD LEADERS - STOP LOCKDOWNS!! https://www.bitchute.com/video/7KtrB8ELM5RH/ COLONEL DAVID REDMAN: “REMOVE FEAR FROM THE MEDIA, STOP ALL LOCKDOWNS” https://www.bitchute.com/video/zlx39wSKexj8/ RICHIE ALLEN INTERVIEWS SWISS CARDIOLOGIST DR. THOMAS BINDER ARRESTED FOR DISAGREEING WITH LOCKDOWN! https://thefederalist.com/2020/11/04/cdc-data-suggest-lockdowns-could-kill-as-many-people-as-covid/ CDC Data Suggest Lockdowns Could Kill As Many People As COVID https://www.bitchute.com/video/e2HZ5P-0rsU/ LOCKDOWN 3 https://www.nature.com/articles/s41467-020-19802-w Post-lockdown SARS-CoV-2 nucleic acid screening in nearly ten million residents of Wuhan, China. New Study of 10 Million Chinese Finds Asymptomatic Covid Spread Never Existed A new study on asymptomatic transmission of COVID not only proves it doesn’t happen it proves the panic promoted by the political class was meant to control the populations.