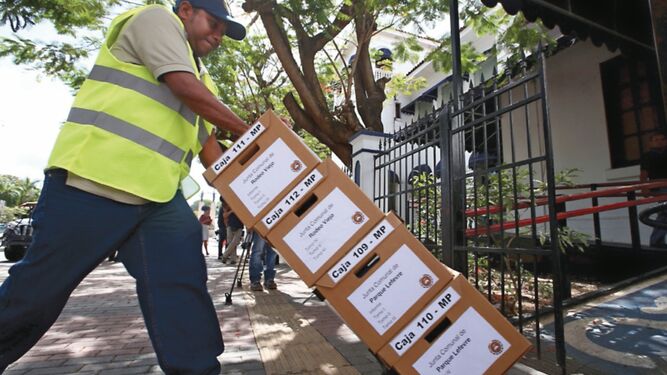 A truckload of evidence arriving at the Public Ministry

The Anti-Corruption Prosecutor's Office has appealed the rulings of the Fifth Criminal Court that annulled the preliminary investigation orders of the member's of the National Assembly Budget Office, allegedly involved in misusing taxpayer money.

Under the spotlight are Roberto Espinoza, Reynaldo Bedoya, and Gladys Cedeño, and the substitute representative of El Chorrillo, Keira Navarro Rodríguez,as part of the investigation for alleged mismanagement of funds in community meetings in the country.

The appeal will be resolved by the Second Superior Court of Justice.

In the case of former officials Espinoza, Bedoya and Cedeño, Judge Enrique Paniza concluded in a ruling on May 21 that the punishable act has not been proven, since - as the auditors of the Ministry of Economy and Finance left it ( MEF) in its internal report, it cannot be determined that there is a patrimonial injury, since that opinion is the exclusive competence of the Comptroller

The prosecutor Adecio Mojica also appealed the decision of JudgePaniza, who favored Navarro Rodríguez for having electoral criminal jurisdiction, by participating as a candidate for alternate representative of El Chorrillo; "Therefore, the action carried out within that period has no value whatsoever and has no legal effect with respect to the one investigated ...".

In the probe, his case, the Prosecutor's Office investigates alleged irregularities in the transfer of circuit items of deputies, which were handled in the last government (2009-2014) by different community boards of the country. So far, 18 people have been imputed.

In a ruling of February 27, Judge Enrique Paniza decreed as a complex case e the investigations of 29 communal juntas.

The investigation of another 157 communal boards is carried out in accordance with the accusatory criminal system.