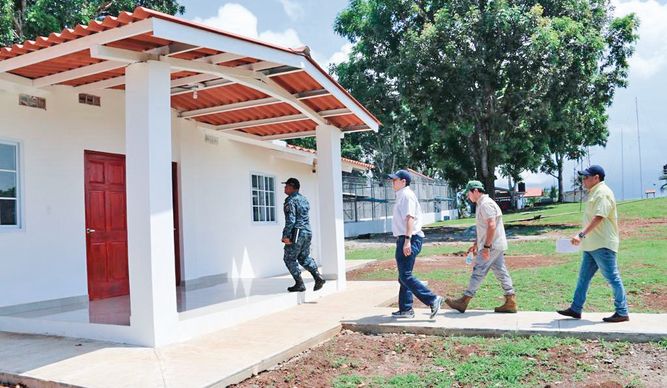 The majority of the 13 detainees in the  Punta Coco maximum security prison, on Isla del Rey, are allegedly linked to the Úsuga cartel clan in Colombia, and the Sinaloa in Mexico

The Úsuga cartel is the main drug cartel in Colombia and has over 3000  men in the country. The Sinaloa cartel operates in most Mexican states.

Seven o the prisoners were captured abroad for allegedly trafficking drugs from Colombia to Panama and dispatching them to Mexico for the Sinaloa cartel The rest were on the list of the most wanted and highly dangerous for links to crimes, gangs, and drug trafficking. with long records including multiple jailbreaks and political links, reports La Prensa.

One of the most dangerous detainees is Moisés Murillo Barberena (alias Moi), who was arrested in a joint operation with the Colombian police.

Moi is credited with being the leader  of the “Kill the Nasty,”  network which stopped being a local  gang to become linked to the Úsuga cartel.,

Murillo coordinated the shipment of drugs from Colombia to members of Kill the Nasty and then transported to the Sinaloa  Cartel.

HE Murillo was arrested after Operation Omega when in which four tons of drugs were seized and 18 others arrested. He was also investigated for his alleged participation in the death of a teacher in Rio Abajo in 2012, but in 2015 his detention was declared illegal.

On February 6, Murillo faced a hearing in the Second Criminal Court for drug-related crimes for his alleged participation in a criminal network based in Rio Abajo, which was dismantled when 33 were arrested and two tons of cocaine seized.

Another detainee in Punta Coco is José Cosio, considered by the authorities to be one of the most wanted criminals. He was arrested in, 2015, in Costa Rica.

His criminal record shows that in 2005, he was linked with the theft of $2.5 million from to the Bank of China in the Colon Free Zone, He was sentenced to six years in prison, but he was released a year early

In 2010 he was arrested in the US and sentenced to six years. He requested to serve his sentence in Panama and was sent to La Joya. He was transferred to the Nueva Esperanza prison in Colón, where he deprived a second lieutenant of the National Police of liberty and was taken back to La Joya.

In September 2014, he escaped and took refuge in Costa Rica, where he was captured months later.

Azael Ramos De Gracia, 35, linked to drug trafficking, and homicideRamos also have two escapes on his record, one in October 2008 when, with five others i, he escaped from La Joyita prison, but was recaptured in September 2009.

In March 2010, during a transfer to the Santo Tomás Hospital, he and other inmates injured one of the guards and escaped. He was recaptured two years later and taken back to La Joyita.

Carlos Enrique Mosquera another of the highly dangerous is linked to the seizure of 320 kilos of cocaine, weapons and luxury cars on a farm in Sajalices, Chame. The seizure took place during Operation Calitín.

Mosquera is linked to the PRD deputy Alfredo Pérez as both appear as executives of the company Versage International, Co. SA. In addition, both are officers at Rapid Cash, SA and Agro Darién, SA

ANother inmate is Ricaurte Villasanta, who was captured in Cartagena, Colombia,  in, 2016, after illegally entering the e country through the Chocó, Darién region. According to Colombian authorities, he was coordinating the shipment of drugs to Panama for that region.

He escaped from El Renacer prison in, 2008, and is facing a 41-year sentence in Costa Rica for drug trafficking.

Carlos Enrique Candanedo Yau, aka as Chino Candanedo, is another of the prisoners He was a fugitive since 2015 and was arrested in Colombia along with Ismael Cueto Bethancourt, in July 2017. Both were wanted in Panama for involvement in gang crime.  They are linked to the Sinaloa Cartel,

The last to enter Punta Coco, on Thursday, February 7, was Manuel Domínguez Walker, arrested in 2018 in the El Gallero operation.

The network led by Dominguez Walker introduced drugs along the coasts of Los Santos and buried them it in safe places, later sending them it by land in double-bottomed vehicles to Central America. Authorities suspended Losa Santos mayor Eudocio Pany Pérez for his alleged participation in the network but a court ordered his reinstatement.

The network is linked to the confiscation of 2.1 tons of drugs, $1.2 million, 28 luxury vehicles, four 4 residences and location for social events.

If Panama executed those extremely violent criminals they wouldn't be a burden on society! Executing those who are violent who cannot live within the laws is good.