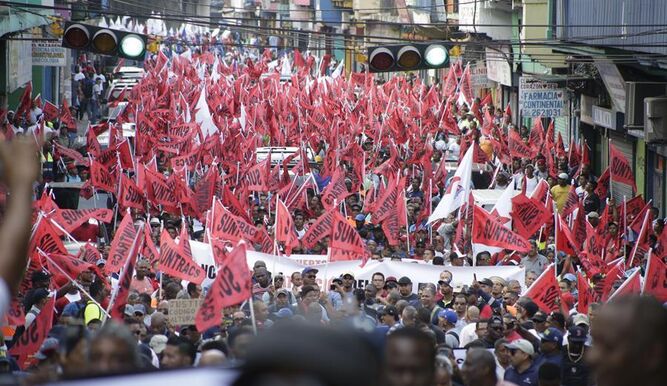 Security authorities deployed scores of armed members of the National Border Service (Senafront) and the National Air Service (Senan) at subway stations and points along the route of a peaceful march by hundreds of teachers, students and workers against Panama constitutional reform on Thursday, November 21.

The march began at the Republic of Venezuela school and headed to  Cathedral Park. This is the fifth week of protests and marches against the changes to the constitution approved by the National Assembly.

According to the authorities, the military-style security was due to alleged alerts of the presence of possible “ infiltrators ”that would attempt against public property.

The Executive and Legislative Body have held sessions to listen to the groups that have denounced the reforms, as they move to the second stage of constitutional reforms that must be carried out in the first months of 2020.

Panama | The Undecipherable Context...Explained. The context I have written are stated on a line-by-line bases is to provide the facts with bits of information in a broad underlying scope. I have transferred much of this information with outlines not always enumerated. My basis for my confusing layout is first to provide inherent facts to associate with the broad scope without elaborate references of boring details. That is up to journalism at its finest covering a limited scope of the hidden nature of politics. I don't just want to say...China is up to no good and someone challenges me to more facts. Most of the time my text is more relevant but it does broaden the brainstorm of thoughts.

George as usual impossible to understand your garbled message

Panama | The Worst Fear From [China] and the Corrupt State Figure Head Watching the YouTube videos of China's influence of the Fiji island takeover... Watching many other videos of the takeover of the islands in those strategic areas... Watching how China will takeover property owners rights with physical aggression... Means... China will go to any extreme to takeover any foreign territory for their navy military bases. China will and has bribed political figures with a $1 million and established casinos in beautiful beaches and destroyed reefs without a study of effects on marine life of the islands. Former president Varela has had secret meetings with China and if he were still president by all indications it would appear that he...Varela would have sold out Panama!!! Those associated with former president Varela to pacify his bribery money from Brazil's Odebrecht are and have placed themselves in a secret complicit operation. The United States is aware of the China influence of domination for geopolitical global control and has made the U.S. military fleet well known. Panama must not let the National Assembly use and abuse its power with a one sided Constitutional reform that will allow non-transparency for more free access to the Panama state funds at their own whim. Corruption of this nature is corruption at the highest level in league with China!