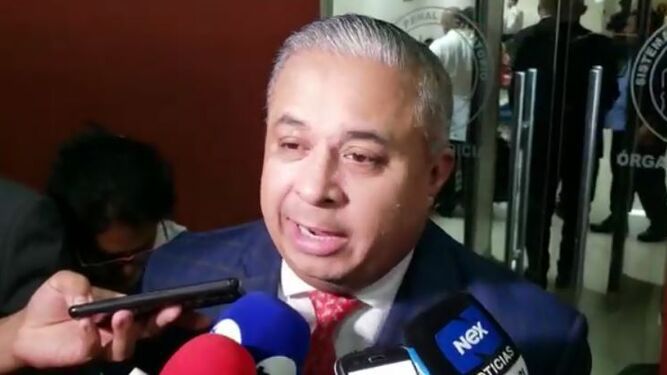 On Friday, April 30, the National Council of Journalism, the Forum of Journalists of Panama, and the Panamanian Radio Broadcasting Association cataloged as "improper" and "intolerable" the statements of Martinelli defense lawyer Ronier Ortiz. The journalistic unions emphasized that these "expressions, coming from a lawyer who is, at the same time, auxiliary to justice, are not only improper but intolerable."

In the statement from the groups, it was recalled on Wednesday, April 28, in the program La Audiencia, which is broadcast on the Nex TV channel , the defense team of former President Ricardo Martinelli, particularly Ortiz, made the statements against Foco and the coverage of his client and news facts of his surroundings.

“… I want you to know, we are going to attack you. Then we don't want them to be crying, because they are crybabies, both you and those who pay them. They are cowards and crybabies. Then they talk about freedom of expression. That is not freedom of expression. That is why, Fernando [Correa], that you see in Mexico the list of those journalists, who like to be getting into things that do not interest them, how it grows every day, how they are murdered because, at the end of the road, there are people who have no tolerance” said Ortiz.

In Mexico, the unions recalled, hundreds of people die every year, including journalists, most of them victims of drug cartels and organized crime. "These issues are of interest to the entire country, including the 144 journalists who have been sacrificed with impunity in the exercise of their duty."

For this reason, Reporters Without Borders has classified Mexico as the most dangerous country without a war in the world to practice journalism.

The words of the lawyer Ortiz, when referring to Mexican colleagues: "... they like to be getting into things that do not interest them ...", clearly "justify his murder and reveal a no longer so hidden direct threat against local journalists and the exercise of freedom of expression and information in Panama ”, the groups emphasized in a statement released this Friday afternoon.

"Consequently, our organizations strongly condemn these expressions, which constitute an affront and direct threats to the exercise of journalism in Panama, Mexico or any other country," they said.

The School of Journalism of the Faculty of Social Communication of the University of Panama condemned this Friday "the unfortunate statements of Ortiz, referring to the crimes of journalists in Mexico, demonstrating joy and satisfaction for what may happen to Panamanian journalists."

Garrit Geneteau, director of the School of Journalism at the School of Communication at the University of Panama, said it is regrettable that a lawyer who is supposed to know the law makes such threatening and shameful remarks.

According to Geneteau, assassinating journalists is to silence freedom of expression and the right of peoples to information.

Panama: Martinelli the Invincible... Financial-Political-Legal-Backing. Former president Martinelli can take candy from a baby... because he is Martinelli. Martinelli can kick anyone out in the streets, including children... because he is Martinelli. Martinelli can get re-elected (fraud), gather confidential information, summon strong... mafia underground operators, continue bond commitments with front men head bankers from Italy, provide Italian base operations on Panama Islands as dubious investment projects. Martinelli can send negative information to the United States to do his dirty work and take financial capital from any number of banks at will... [THE BOSS] ... YES, sir! Martinelli put his hand immediately without hesistation from the PAN state funds by providing one of his henchmen an expensive $500 thousand wedding... by providing an expensive $510 thousand mansion, the one and only former secretary... Chichi De Obarrio... captured and imprison recently in Italy and released without fail! Martenelli connection is fool-proof from his visit to Italy while serving as Panama's president. Panama could not establish a children's hospital during Martinelli's presidency! So, what was Martinelli doing in Italy and why did Italy's Berlusconi visit Panama? Italy knows... [knows] Martinelli has... [IMPUNITY WITH GUATEMALA PARLIAMENT]. Italy knows... [knows] Martinelli is a billionaire business man that has what it takes! Greed and Impunity, repeat... greed and impunity and will stop at nothing. In fact, Martinelli is well known as the loco and has established his metro rail connections for a respectable honest business man appearance. Italy knows... knows Martinelli has tons and tons of lawyers and the political will to allow Italy to take actions with any number of political Panama operations... greed and $$$'s! Including high crimes of turf wars in the streets of Panama... turf wars! When Panama debt is beyond conventional financial repair... China will supply predatory loans. Either way... Martinelli and the Mafias will live in the luxuries of Panama's islands with China's elite institutions and restaurants ($50 million spy headquarter that was dismissed after the former president Varela's administration)! Panama will no longer be Panama but... Italy / China / Russia - Cuba and the... Panama Cortizo Herd Communism United!

Panama: Martinelli and his Lawyers have their $$$... laughing at journalists. Martinelli is taunting journalist knowing there is nothing the government or police can do. Martinelli owns Panama through his connection by tunneling for money. Martinelli owns money (state funds) he has the Italian mafia connections. Martinelli is the gateway to hell with any number of chaos at his command. Martinelli has $$$... prostitutes... connections... political power... impunity... and a list of those murdered and will be murdered on his list... Pegasus spy equipment. Martinelli controls everything... everything and will claim your house and kick your children out to the... [STREETS] AND LAUGH AT YOUR PLIGHT! Martinelli will burn Panama to the ground and let chaos reign. Stay tune as Martinelli enjoys his mockery even further with his... new cancer illness and sincere worries about his two sons... sure, sure they have his money. Journalism is more than freedom of speech; it is fighting for the lives of Panamanians! This is the time... for serious protests from...ALL... Panamanians against the railings of a... psycho, loco mad man taking every dollar value he can from the state. Panama... you don't deserve a dime because you cannot defend yourself from the man that kicks out children in the streets by taking their homes from the very Attorney General that only saves her because of her own legal power to do so. What legal power does Panamanians have.? None, your garbage according to the mad man... loco Martinelli!!! Panama will be worse than Venezuela but... Martinelli can rest assure that the United States will take [HIS SONS] and dump [HIS] FAT BUTT, in the streets of... INTERNATIONAL PRISON!