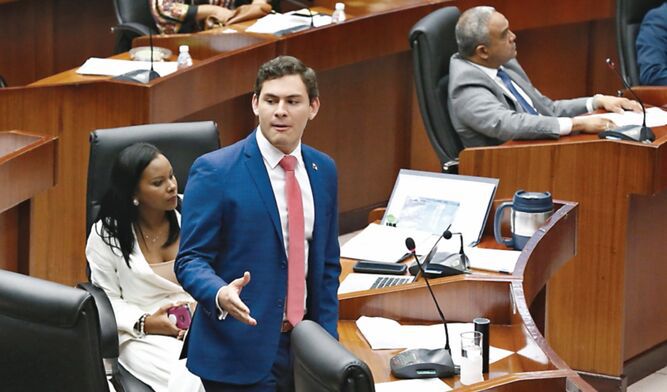 The Independent deputy Juan Diego Vásquez gave a withering report on the weaknesses and recurring malpractices in the three branches of the State during the Radar program broadcast on TVN.

He questioned the Executive headed by the President of the Republic Laurentino Nito Cortizo, for belatedly presenting bills that he promised to promote to remove the country from the gray lists.

"The president knows that in two months, at the beginning of July, he will have to present himself to the Assembly and to the country, (...) and he will say 'I complied with presenting the projects as I said in January', without any interest real that they are discussed or very sure that they are approved, "said the deputy.

He called the “pact of impunity” the method of cross-trial that exists between deputies of the Assembly and magistrates of the Supreme Court of Justice. This is due to the usual strategy of the Credentials Commission, chaired by the PRD deputy Roberto Ábrego, of not admitting complaints against magistrates of the Court.

In turn, the Court is reciprocal. Recently,  it declared "not guilty" the PRD deputy Arquesio Arias, of sexual crimes.

He spoke of the dispute for the presidency of the Assembly, a body that must choose a new board of directors on July 1. Here he affirmed that the Executive "fears" "what a deputy with a little more experience", whose name he did not disclose, could "dare to do."

Among the most veteran and powerful deputies in the Justo Arosemena palace are: Benicio Robinson, president of the Democratic Revolutionary Party ; and Crispiano Adames.

He added that the President of the Republic "is not managing the ship" and that whoever is at the helm "wants to steer it for his convenience." "He is managing it according to the interests of his pocket or his political interests."

When asked who that person is, he did not hesitate to answer. "I think it is clear that they are the petty interests of the Vice President [José Gabriel Carrizo] and his closest political group (...)," he said.

Panama: Named Key Political Players of Induced Corruption... Includes President Cortizo. Panama president Cortizo named by independent deputy Juan Diego Vásquez describes Cortizo as not really taking actions on the... "Bills he promised promote to remove the country from the gray lists." Yet, he will state he carried out the project this coming month of July before the assembly. President Cortizo broke his promise and lied to Panama fregarding his duties... dereliction of duty. Cortizo's vice president Carrizo, performed his duties based on his interests... "He is managing it according to the interests of his pocket or his political interests." Pact of Impunity squarely blamed on... Chaired by the PRD Credentials Committee [Roberto Abrego]! Non admission of complaints of magistrates was due to Roberto Abrego... derelict of duties. Powerful names mentioned in the political elite assembly... "... Benicio Robinson, president of the Democratic Revolutionary Party; and Crispiano Adames." Conclusion of complicit party at the top of the government leaves no doubt... Panama president Laurentino Nito Cortizo is head of the corruption body of government at the detriment of Panama tax payer citizens with his vice president with his corruption monetary political interests. Panama pres. Cortizo allowed corruption under his watch for his 5-year term after the presidency the former corrupt administration of Martinelli costing $billions to the detriment of... Panama tax payers with suppression of freedom of speech and lawsuits against the news media. What is that like? Adding insult to injury without justice and address of the issues. Panama president Laurentino Nito Cortizo equated himself the same status as the most heinous of corrupt ruler of the Martinelli administration as Martinelli himself in recognition of published criminal facts and not serviced in the justice of the court magistrates. Roberto Abrego did not submit complaints against the magistrates under the supervision of... Panama president Laurentino Nito Cortizo are both... [major accomplices of blatant corruption]! President Cortizo has labeled himself a blatant... [liar]l... not to be trusted with his administration and left a repugnant reputation as an underground watch dog for corruption in his wake! President Laurentino Nito Cortizo and former president Martinelli are... [one and the same in the status of criminal mentality to the detriment of Panama tax payers]!!! The underground exposed with... [Martinelli and the Sons of the Underground]. Meaning... Cortizo and the Martinelli [GOD FATHER MAFIA UNDERGROUND]! This is not a rash statement but based on the facts... Cortizo and Martinelli are one and the same.