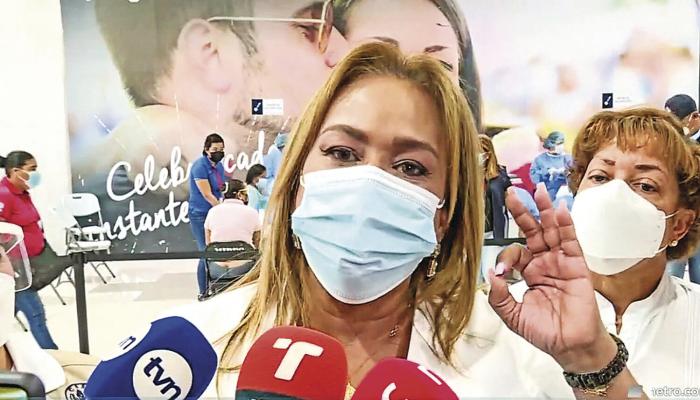 The investigations led by the Public Ministry of clandestine vaccinations in Coco del Mar have fired up accusations on social media of close connections between Ministry of Health counselor  Eyra Ruiz and Denisse Vega former manager of a laboratory linked to the scandal.

On Wednesday, June 9  Ruiz told La Estrella that they have not given any instructions to work with a private clinic or laboratory to vaccinate and much less to sell them. "Let the justice do what it has to do and that the prosecution investigates if those vaccines came from outside, if they were saline solution vaccines or if these vaccines came from somewhere in the National Government, which I am sure they are not because we have not given no instructions to work with any clinic or any private laboratory to give vaccines and sell them, ”Ruiz said.

She pointed out that Denisse Vega, a member of the board of directors of Vidatec and Cordón de Vida, companies accused of using their premises for clandestine vaccination, is only known. “She offers the laboratory service as she offers it to all gynecologists in the country. In fact, she is a professional woman and I have always had respect for her like any professional woman, but to say that I practically have coffee and cookies with her and tea every day is not true.

I really know the father Dr. Mario Vega, who is a gynecologist like me, and I know what the family must be going through."

Meanwhile Vice President and Minister of the Presidency, José Gabriel Carrizo, announced that he will proceed legally against the promoters of attacks, infamies, lies, and slander against him and his family. after social networks mentioned supposed friendships of a relative of Carrizo with people who presumably may be linked to this fact.

“For long months I have endured with stoicism a myriad of insults, reproaches, and slander, despite the fact that they lack any foundation," he said.

He stressed that so far, he has proceeded by virtue of being an elected official and convinced that, as such, he must respect public scrutiny. However, he stressed that "it is intolerable that in the face of not responding to completely unjust accusations, the attacks are directed towards members of my family, pointing out alleged links with inappropriate matters, which can only be conceived by unhealthy minds."

Carrizo warned that he reserves the right to proceed legally against those who may be the material authors or promoters of the “infamies”.