Green alert for Panama in wake of tropical storm Ian 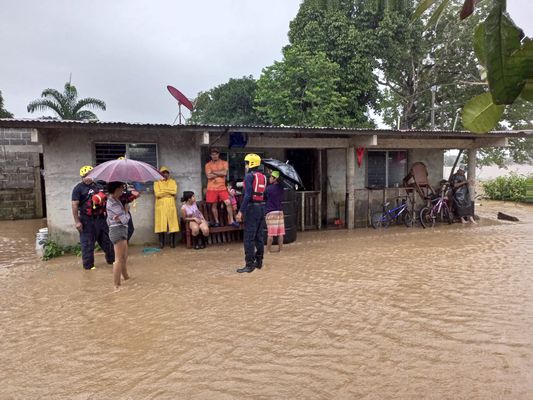 A green alert for the entire country due to the heavy rains generated by the cyclonic effects of Tropical Storm Ian was issued on Saturday morning.

According to the National Civil Protection System (Sinaproc), the storm is generating a trough towards a large part of Central America. The alert will last until October 3.

At around noon, the first floods were reported to the east of Panama city and in the province of Veraguas. Sinaproc personnel went to the La Mireya de Las Garzas sector. They rescued a family that lived in a zinc house, which was flooded due to the overflow of the river.

In the San Miguel sector, district of San Martín, a residence was affected by a landslide. While in Pacora a river overflowed and the road was flooded. Dozens of drivers were unable to continue their journey.
A tree fell on a vehicle in Costa del Este. Firefighters worked to remove the branches.

Meanwhile, firefighters reported that the Loma de Quebró community, south of Mariato, province of Veraguas, was left incommunicado due to the overflow of a river. Flooding was reported in that sector.

Sinaproc stressed that the alert is for all provinces and regions.

He indicated that heavy rains are expected in Bocas del Toro and the Ngäbe Buglé region during Saturday night and early Sunday morning.