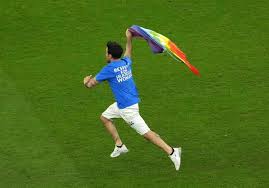 A fan invaded the pitch of the Lusail stadium during the match between Portugal and Uruguay with a rainbow flag to demand the rights of the LGTBI+ community and a message printed on his shirt asking for "respect for Iranian women".

In the 51st minute of the Qatar 2022 Group H match, the fan jumped onto the pitch with the flag in one hand and walked around the pitch. The banner fell from his hand when he was being chased by the security forces and the referee Alireza Faghani picked it up from the ground.

The spectator was reduced and removed from the pitch by the agents and the match resumed.  Earlier in the week, a group of Wales fans  wearing  Rainbow  hats were banned from a stadium– EFE News.