Damage and injuries in 6.2 earthquake 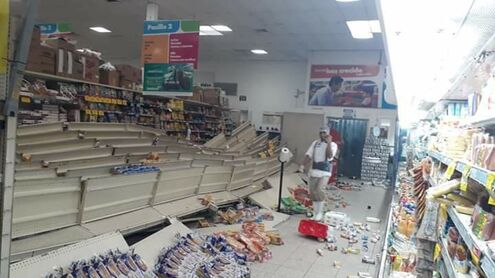 Businesses and homes were damaged and at least two people were injured by a 6.2 magnitude earthquake that rocked western Panama in the border with Costa Rica soon after 1 pm on Sunday, May 12. It was initially reported as 6.3 on the Richter  scale

The National Seismological Network said the quake occurred at 13.24 local time (19.24 GMT) with an epicenter one kilometer northeast of the town of La Cuesta.

Authorities indicated that the quake originated 24 kilometers deep and was reported as felt in most of the country but particularly in Chiriqui  Bocas del Toro and Cocle.

The map of the first reports made by users of the National Seismological Network indicates that the intensity in the Central Valley was between a III (weak) and IV (moderate) in the Mercalli Scale.

While in the area of the epicenter the tremor had an intensity between V (strong) and VI(very strong) in the Mercalli Scale.