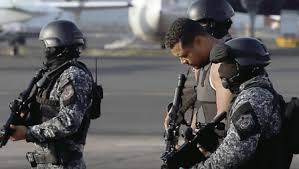 The Second Criminal Chamber of the Supreme Court has reversed a, 2019 judgment, issued by the Second Court of Justice, which acquitted Eduardo Macea, alias Marshall, and three others of charges of murder and unlawful possession of firearms.

The ruling also hit  Jairo Dino Dángelo Muñiz, who was previously sentenced to 30 years for homicide, but now, will serve  40 years behind bars.

They were found guilty of the 2014 murder of Daniel Jesús Reid, between Calle 2 and Arango Avenue, in Colón.

Those involved, according to a press release from the Public Ministry, tried to escape but were caught by agents of the National Police.

The sentence came after the Superior Discharge Prosecutor of the Metropolitan Area, of the Public Ministry, appealed the judgment of the Second Court of Justice that only sentenced only Jairo Dino Dángelo Muñiz, and released the others.

The Second Chamber of the Court argued that "there was no correlation with the court's ruling in sentencing only one of those charged with the crime." "The same arguments with which Dángelo Muñiz was sentenced are valid to declare the rest of the sentenced guilty," adds the ruling.

Marshall is currently incarcerated in the Punta Coco maximum security prison, located on Isla del Rey, in the Panamanian Pacific, while under investigation for the alleged illicit possession of firearms and drug trafficking.

Considered "The capo de Colón", he was arrested on March 12, 2019, in Isla Naos in a tracking operation. During his arrest, there was an intense gun battle and a policeman was injured. At the time he was one of the most wanted, linked by the police and judicial authorities with drug trafficking and a crime wave that shook the province of Colón.