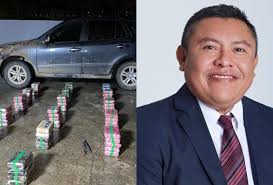 President Cortizo who appears to have been wearing blinkers in the face of ethical violations by high profile members of his administration after promising to show no mercy, to transgressors moved with alacrity on Tuesday, September 15 to fire the Governor of Guna Yala, Erik Martelo Robinson who was caught transporting drugs at dawn the same day.

"I have instructed the Minister of Government to proceed with the immediate dismissal of the governor of Kuna Yala, by virtue of an inadmissible criminal act. I reiterate my commitment to zero tolerance with practices that violate the ethics to which all public officials are subject," said a Twitter posting

Units of the National Police Intelligence Directorate seized 79 packages of drugs, inside a vehicle, in Las Garzas, Pacora.

"The illicit substance was located, under the seats of the vehicle that presents alterations in its structure. There are two Panamanians apprehended for investigation, “ said the National Police Twitter account.

Cortizo also moved swiftly to name a successor, Alexis Alvarado as the new governor of Guna Yala. "We are confident that his performance will meet the expectations that our government sets in his ability and honesty," said the president.

I am sure it was just for personal use. The weekend is coming you know

Job qualification is being able to outsmsrt or bribe the police. Last dude failed so Cortizo puts another at the plate to take a swing!