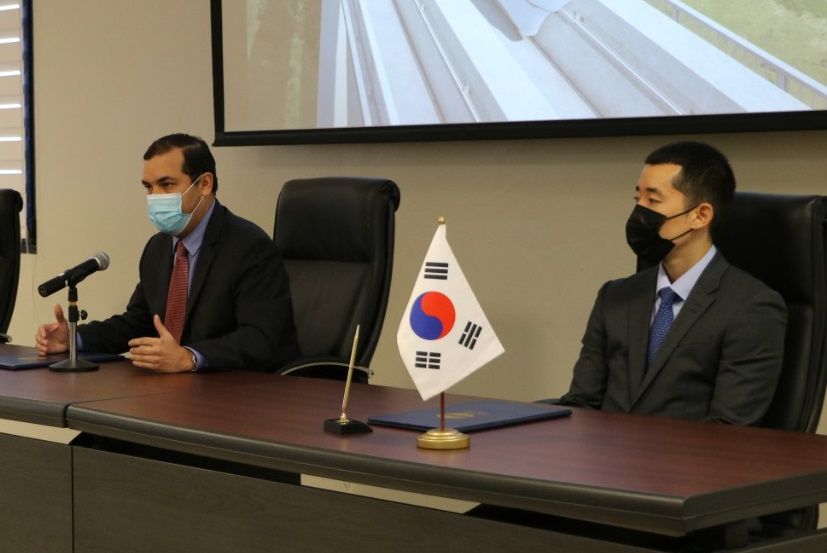 The contract for the design and construction of  Metro Line 3 includes rolling stock was signed this Thursday, October 29, by the Héctor Ortega director of Metro  Panamá, SA, and the legal representative of the HPH Joint Venture Consortium made up of the Korean companies Hyundai Engineering & Construction and Posco E&C, Daniel (Goo Hyuk) Chung.

The document will be sent to the Comptroller General for endorsement and subsequent delivery of the order to proceed. The contractor has 54 months to build the line

The contract was also signed with the nominated sub-contractor (Hitachi and Mitsubishi) in charge of supplying the rolling stock (monorail) and the integrated operations system.

The project will connect the province of Panama Oeste with Metro Line 1 at the Albrook station, reducing the average travel time in rush hour, from 90 to 45 minutes.

"This work, during its construction phase, will have a social and economic impact for Panama Oeste, since it will generate more than 5,000 jobs, and it will also benefit more than 500,000 inhabitants of this province," said Ortega.

Line 3, in its first stage, 24.5 kilometers from Albrook to Ciudad del Futuro will have stations and will pass under the Panama Canal through a 4-kilometer.tunnel.

The Panama Metro has the compatibility permit from the Panama Canal Authority (ACP) to execute and operate the crossing under the Canal.

It is estimated that this line will handle 20.000 passengers during peak hours, with a four-minute interval between trains.

A single rail (Monorail) going over the canal would not only be cheaper (by a lot), but would draw tourists. Interesting move.

So why under the canal and not on the new bridge they can not afford. Could the money from digging a tunnel not be used to host cars and the subway trains on the bridge