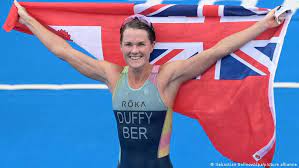 To look at the feat another way, a similar ratio would give China around 19,000 golds. The only previous Olympic medal for the British island territory was the bronze in men's heavyweight boxing won by Clarence Hill in 1976. Duffy, 33, finished 74 seconds ahead of Britain’s Georgia Taylor-Brown in the event, which involved a 1.5km swim, a 40km bike ride, and a 10km run.

"Yes, this was my dream, but I also knew it was bigger than me," said Duffy, who was competing in her fourth Olympics. "It’s been a heck of a lot of pressure," she told the Guardian. "I would never recommend being an Olympic favorite for five years. But it is all worth it now."

In another Olympic first, the Philippines' Hidilyn Diaz won her country's first-ever gold medal Monday, Time reports. She also set an Olympic record in the 55-kilogram women's weightlifting category. For ending the country's 97-year wait for gold, Diaz has been given $660,000, a house, and a luxury condo by the government and several business tycoons, reports Bloomberg.

I am so proud to reveal to all that I am a tried and true born Bermudian, who married a wonderful Panamanian woman. Flora Duffy has once again done our little island in the middle of the Atlantic proud. Already a world champion, she has now added Olympic champion to her resume. Bermuda sportspersons continue to reach global levels and every Bermudian, at home and abroad, is celebrating Flora's amazing achievement. Congratulation!!!!