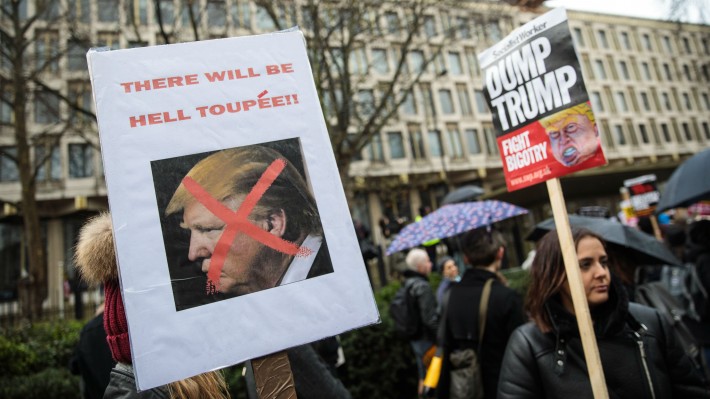 Buckingham Palace has announced that Donald Trump will take part in a much-delayed state visit to the UK from June  3 to 5 reports The Week.

The trip was first agreed in 2016 but was “put on hold” the following year, although the US president made a short working visit to Britain last July. The confirmation that he is now set to return “has renewed controversy over Theresa May’s decision to invite Trump” for a state visit - the highest honor afforded to visiting dignitaries - when she visited the US shortly after he took office, says The Guardian.

The announcement risks “a repeat of the nationwide public protests which greeted the US president during his trip last year”, says Bloomberg. More than 250,000 protesters took to the streets of London and a four-meters-high orange Trump baby blimp was floated above Parliament Square.

In total, the policing operation for the visit “cost an estimated £18m”, reports The Guardian.

During that trip, Trump met with the prime minister and had tea with the Queen at Windsor Castle. But as CNN notes, the president “ruffled feathers in the British establishment” when he criticised May’s Brexit deal and praised her leadership rival Boris Johnson as a “very talented guy” during an interview with The Sun.

Confirming that Trump will be back again soon, May said: “The state visit is an opportunity to strengthen our already close relationship in areas such as trade, investment, security and defense, and to discuss how we can build on these ties in the years ahead.”

She added: “We must continue to stand together to uphold our shared values and way of life.”

A White House spokesperson said: “This state visit will reaffirm the steadfast and special relationship between the United States and the United Kingdom. In addition to meeting the Queen, the president will participate in a bilateral meeting with Prime Minister Theresa May.”