The facts and values of face masks 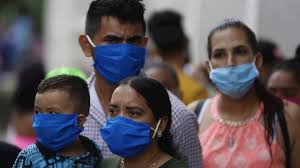 Despite disagreement among scientists, people in Britain will soon have to wear cloth face coverings on public transport. The policy could be extended to places such as shops where social distancing is difficult writes Trish Greenhalgh in The Guardian. They are already mandatory in Panama.

Passions run high on this issue. I have some sympathy with the person who demanded that scientists should be locked in a room and not let out till they agree the facts. Except that this debate is as much about values as facts.

One of my colleagues is a philosopher of science. On day one of his course, he sends his students out to “go and get a fact, and bring it back to class”. When they return, he invites them, one by one, to carefully present and defend their fact against critique from fellow students. How was it sourced? How was it measured? Does it stand firm now that it has been plucked from its context? No fact ever survives in the form that the student presents it. The lesson is that being rigorous and systematic in producing a fact does not make that fact absolute.

Take randomised controlled trials, for example. Surely it’s good science to take a sample of people during a pandemic, randomly allocate half of them to wear cloth face coverings, and look for a statistically significant difference in how many develop the disease?

Let’s unpack the quest for that particular fact. First, let’s design the intervention. As laboratory studies have shown, fabric materials are good at stopping large viral-laden droplets on their way out, but they’re not very good at stopping tiny airborne viral particles on the way in. So the intervention we need to test is something called source control: the effectiveness of my cloth mask in protecting you; yours in protecting me.

Let’s therefore test, in all members of the general public (population), the impact of cloth face coverings (intervention) compared to no coverings (control) in public places (setting) for preventing infection in other members of the public (outcome).

There have never been any such trials. Why not? Because such a trial would be impossible. Which people, exactly, would you randomise? Everyone who lives in a particular street? Everyone who catches a particular bus? To be included in a randomized trial, people have to give informed consent and agree to comply with the intervention. If only a small proportion agrees, how many streets or bus-loads or squares-full of people would you need to invite in order to get enough to generate your “fact”?

How would you test the hypothesis that my mask protects you? This is problematic because, instead of just following up with one individual who is already signed up to the study (me), you’d somehow need to identify a fraction of all the people I came into contact with as I went about my life, and test each of them to see if they developed the disease. But none of those other people (random street-dwellers or bus passengers or square-crossers) agreed to be in the trial in the first place. You simply can’t study them like laboratory animals (though someone has done a randomized controlled trial to show that face coverings are highly effective in reducing SARS-CoV-2 transmission in hamsters).

In order to “do science” on the effectiveness of face coverings in the real world, you would either have to define some kind of closed system to be your sampling frame, say a school or home environment or compromise and study the effect of mask-wearing on the wearer rather than on other people. And that’s what scientists have done.

I’ve reviewed all the published randomized trials on masks and face coverings for the general public in a peer-reviewed scientific paper. The trials consist of studies of mask-wearing in closed systems and of masks to protect the wearer, usually at specific mass events (notably, pilgrimages to the Hajj). Furthermore, all these studies were done some time ago when the prevailing diseases were colds and flu. None looked at prevention of Covid-19.

What did these not-terribly-relevant trials show? Masks seemed to provide some protection for the wearer, but effects were small and usually not statistically significant (perhaps because studies were just too small to produce a clear answer). Masks given in the home, for example, to protect the parents of a child with flu from catching it themselves, didn’t have much effect – but then they weren’t worn much (for a variety of reasons including “child did not like parent wearing a mask”).

These findings are facts of a sort. I’d love to discuss them with my philosopher colleague’s students. But the bottom line is we have no directly relevant facts from randomized controlled trials of source control in Covid-19. What now? Demand that policy should not change until the much-desired randomized trial exists? Or suck it and see? Here’s where values come in.

Drug testing
Randomized trials were developed to test drugs. As we know from thalidomide, new drugs can cause terrible harm. Scientists arguing for caution in the masking debate are almost all medically trained and view the principle “do no harm” (by which they mean, never give a new drug to any patient before it’s been tested in a randomized trial) as overriding.

In public health, however, interventions are usually introduced pragmatically and evaluated as before-and-after natural experiments. There are no randomized controlled trials in community settings, for example, of handwashing, social distancing, closing schools, quarantining, closing borders or contact tracing. Public health scientists value natural experiments highly because they view the trade-off between real-world achievability and experimental ideals as worthwhile.

Like dozens of other countries, England is about to have a natural experiment of face coverings in public places. Still, the scientists will continue to argue. If transmission rates of Covid-19 fall as predicted, public health experts – and I count myself among them – will say this has produced a “fact” that face coverings are effective source control. And triallists will say that in the absence of a trial (which they will continue to demand), this is not a fact because there’s no robust evidence that the association is causal. Whether we can agree on “the facts” or not, we’ll hopefully welcome the positive outcomes, as I predict that transmission of Covid-19 will fall and that any harms will be relatively minor and worth the trade-off.

I have a solution for all of you. If you do not like the fact that I do not wear a mask, then do not come near me. Go the other way when you see me. I do not care about science or your supposed facts. I remember when the "scientists" were telling people that eggs were bad for you. Then they had to change their position because they discovered centurions living in India had lived on an egg diets all of their lives. I do not believe anything they say. Most of them have a political or financial agenda. Freedom of the many outweighs the casualties of a few. If you want to live like a slave in a bubble of fear, fine, but do not try to drag me down into your quagmire.

A comment on this thread regarding increasing viral load. The doctors that treat people with a virus advise the patient not to wear a mask because it adds the virus back into the nasal and respiratory system since you cannot expel it properly. Also most people cannot help adjusting their masks and touching their faces near their eyes and nose. Seems like a higher risk than not wearing one. Also see the linked article that expresses different views on should or should not wear. Some very credible doctors say no it cannot stop the spread of a virus. https://pjmedia.com/news-and-politics/megan-fox/2020/05/14/neurosurgeon-says-face-masks-pose-serious-risk-to-healthy-people-n392431 I think I would go with the experts and not some non experts opinion on this matter.

I wear a facial mask in a public setting to protect you, please wear a mask to protect me. This is the only control we have. But remember to clean your hands when leaving a public place before removing your mask.

Well said ....problem is 90% of wearers think its worn to protect them. Not that that matters as long as they wear one.

In 1976 the US government believed its population needed the swine flu vaccine. Over 46 million were injected and many came down with Guillain–Barré syndrome, a paralyzing neuromuscular disorder. Recompensation charges were filed for over 4,000 cases of severe vaccination damage, including 25 deaths, by 1979. The obvious philosophical question is whether a government should have the right to force its population to serve as guinea pigs for their favorite theory. For over 100 years hospitals have not found it advisable for patients or doctors to wear masks except for short times in certain circumstances. The government apparently believes they did not know what they were doing and we need a huge experiment involving the entire population to prove it.

One doctor made a whole lot of sense when he spoke on COVID transmission: there are 2 things to always think about to prevent contracting the disease: 1•your hands; 2=your face. During your daily movements outside, you’re going to contaminate your hands between times you have access to a sanitizer. That does not matter unless those contaminated hands touch your face because think eyes, nose and mouth. Now, have you ever watched tv lately, in particular news video coverage of the protests in various US cities. It’s an education to see almost every person tugging at their mask to pull it up or down, doing and undoing the ear elastics, adjusting for comfort, etc. In those cases and other actions, the hands touch the face near the eyes, and their noses — the places where the virus can enter the body. You can witness in real time the almost constant fidgeting with their masks (for those who even wear them), adjust hair away from their eyes and just a nervous gesture or habit. Hands/face — you need to be aware at all times while out the relationship of these two

Yet again you miss the point. The mask is not there to protect you its to protect me from viral load and reduce the intensity of the viral ingestion. Tug on it if you will thats up to you. Just as long as your expelled droplets stay away from my mucus membranes

Nice story but still just an oped opinion. The assumption is that someone who has a virus is coughing it into the air. Since the cloth covering cannot stop a virus or pretty much anything else except dust healthy people have their breathing compromised. Masks are not advised to be worn for more than 45 minutes at at time. Too much re breathing of CO2 and poor oxygen transfer. Why not go study the effects of wearing a mask on health vs not one? Or perhaps looking for existing studies on the subject. If you are going to tout one side of the story you also need to examine the other.

Not true its not to stop every small viral particle but to reduce viral load in the air especially in closed areas. Your degree of illness is dependent on the viral load you ingest into your lungs A light or small volume might well get caught in the upper respiratory tract and not deep down into the lungs where most damage is caused.