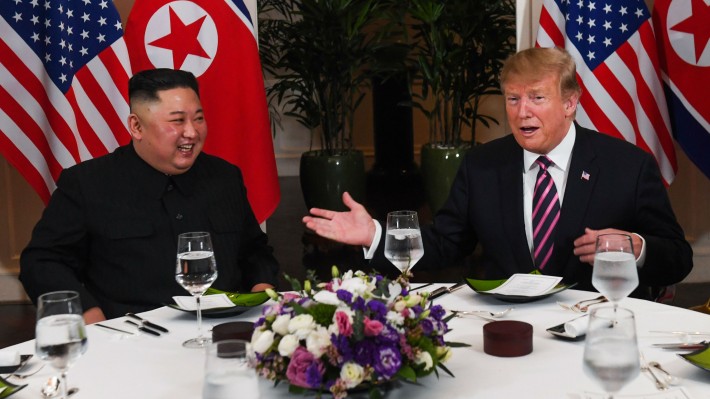 Trump and Kim dine in Hanoi

Donald Trump and Kim Jong-Un began their second summit amid speculation that both men are hoping to be rewarded with a Nobel Peace Prize reports The Week.

As the talks kicked off in Vietnam, the US president is maintaining the approach he has pursued since his first meeting with his North Korean counterpart in Singapore last June - “to flatter Kim and hold [up] the prospect of great prosperity for Pyongyang if he agreed to nuclear disarmament”, says The Guardian.

“I think your country has tremendous economic potential – unbelievable, unlimited. I think you will have a tremendous future with your country – a great leader. And I look forward to watching it happen and helping it to happen,” Trump told Kim at talks in Hanoi.

The North Korean leader returned the compliment, saying that he ”truly believes this successful summit is because of the courageous decision by Trump”.

But insiders from both administrations believe there may be another motive for this new round of diplomacy - the Nobel Peace Prize says The Week.

At a press conference earlier this month, Trump boasted that Japanese Prime Minister Shinzo Abe had nominated him for “a thing called the Nobel Prize”. Abe “had missiles flying over Japan... Now all of a  sudden they feel good, they feel safe. I did that,” the US president claimed.

Trump complained that his predecessor Barack Obama had been awarded a Nobel in 2009 without really deserving it, while he, despite his accomplishments, “will probably never get it”.

All the same, Trump clearly still fancies his chances - “a helpful thing to keep in mind”, says Quartz. At the summit, “expect Nobel-friendly optics and statements from the US president, but not much pushing on human rights or democratic reforms”, the news site adds.

The award goal is seemingly one shared by Kim, with a North Korean source telling Radio Free Asia that the Nobel Peace Prize is suddenly a hot topic in the nation. The state press is reportedly claiming that international media is proclaiming Kim as “the world’s greatest man”.

Kim Myong-chol, an unofficial spokesperson for the North Korean government in Japan, told The Daily Telegraph: “I believe that Trump should receive the Nobel because of the contribution that he has made to achieving peace on the Korean Peninsula, but Kim would not turn the honor down if it was given to both of them together.

“The decision on the award is in the hands of the Nobel Committee, but I am sure that Kim would accept it if he was nominated with Trump. It would be a great honor and one that indicates that things on the Korean Peninsula are going in a very favorable direction.”

Despite their shared aim, commentators believe the pair remain a significant distance from reaching an agreement.

North Korea “has shown little sign” of discontinuing its nuclear programme, and “many believe it will never agree to completely denuclearise”, says Quartz.

As such, the Nobel speculation is “premature”, argues USA Today.

“If, eventually, there’s tangible and verifiable progress that persuades Kim to relinquish horrible weapons of mass destruction, then we can talk Nobel,” the newspaper says.

But “even in the checkered and controversial history of the Nobel Peace Prize, the leader of perhaps the world’s most repressive state would appear an unlikely recipient”, adds The Washington Post.

Even so, “delusions” such as these “can be helpful if they make each side more willing to make concessions and pursue an arduous peace process”, says The New York Times’ Nicholas Kristof.

The “greatest threat of this presidency” was that the US leader might stumble into a nuclear war, so “if Trump and Kim pursue a painstaking peace process instead, in some illusory quest for a Nobel Peace Prize, we can live with that”, Kristof concludes.