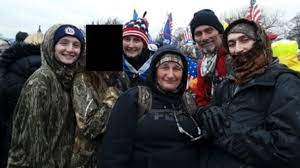 WASHINGTON — Five members of a family from the Texas Panhandle were arrested Tuesday, becoming the largest group of relatives charged in connection with the January 6 riot at the U.S. Capitol reports NBC

Thomas and Dawn Munn, of Borger, Texas, and three of their children, Kristi, Joshua, and Kayli, were charged with illegally entering the Capitol and engaging in disorderly conduct.

Several married couples have been among the 532 people accused of joining in the Capitol siege, and there are examples of an adult and a child entering the Capitol. But this latest case involves almost an entire family.

Court documents said the arrests followed a tip from a relative of the fiancé of Kristi Munn, making this another instance of friends or relatives alerting investigators about who was in the Capitol.

The charging documents said Tom Munn posted a message on Facebook in late December urging people to come to Washington. "Our President has asked two things from us so far ...#1 Vote #2 January 6, 2021."

Court documents said that when an FBI agent interviewed Kristi Munn by phone, she denied that she was inside the Capitol. But investigators said the day after the riot, she wrote in a conversation on Facebook, "We were in the Capitol!" adding, "Just keep that bit of info on the DL for now," or the down-low, meaning private.

All five family members are charged with four counts related to the siege, and each is a misdemeanor. Court records say member of the family have requested a court-appointed lawyer.